3 Misconceptions of One of the Most Unknown, Fruitful Theological Ideas Molinism and the doctrinal equivalent of scientia media (middle knowledge) is perhaps one of the more fruitful Reformation-era theological thought-systems that’s largely unknown.

Yet, as Kirk MacGregor reveals in his new book Luis de Molina, “Molina’s thought is quite relevant to Christians of all theological stripes, whether Protestant, Catholic, or Orthodox.” (12) In fact, middle knowledge is “one of the four principal views on divine providence and omniscience, alongside Calvinism, open theism, and simple foreknowledge.” (13)

Perhaps the reason why Molina’s theology is so unknown is because he is largely unknown. While Bainton gave us Here I Stand and Cottret Calvin: A Biography, no modern biographer has traced Molina’s person and thought-development. Until MacGregor’s volume, that is.

His seminal work in Molinism studies charts the man and his middle knowledge, the belief that God knows not only everything than does or will happen, but what his free creatures would choose in all possible circumstances.

At the start MacGregor helpfully outlines three major misconception of Molina’s theology. Reviewing these misconceptions paves our way toward better appreciating “one of the most fruitful theological concepts ever formulated.” (11)

Misconception #1: Molinism is for Catholics

First, many reduce Molina’s theology to merely a Catholic facsimile. Though he did praise the Catholic Church for progress made post-Trent, Molina “charted out a course that was neither mainline Catholic nor compatible with the Protestant Reformers’ impulses.” (16)

For instance, Molina agreed with the Council of Trent’s assertion of human freedom. He was discouraged, however, with the Council’s affirmation of the Thomistic doctrine of grace. “For he believed this to be a faulty view of grace as a kind of divine substance that empowered people to perform good works.” (18)

Interestingly, Molina agreed more with Luther and Calvin on this point, “understanding grace as God’s unmerited favor toward sinful humans and God’s unmerited assistance in securing their regeneration and sanctification.” Yet unlike the two, Molina affirmed that “God gives sufficient grace for salvation to every person that he creates…” (18)

Though Molina sought to reform from within the Catholic Church, he “navigated a middle ground between Tridentine Catholicism and Protestantism.”

Misconception #2: Molinism is Arminianism By Another Name

One of the more pervasive allegations is that Molinism is Arminianism of a different stripe. MacGregor contends such exaggerated guilt-by-association virtually forestalled Protestant interaction with Molina for nearly 350 years.

Yet MacGregor reveals that “Molina would have accused Arminius of misunderstanding exactly what he meant by middle knowledge since Molina anticipated Arminius’s construal of middle knowledge and explicitly rejected it in Concordia.” (20)

Except, Molina rejected this idea outright, judging it a “severe defect in the thought of Luther and Calvin that God’s sovereignty seemed threatened by human free choices and random events in the world.” (24–25)

Discover yourself why many modern evangelicals “laud Molinism as the long-awaited rapprochement between Calvinism and Arminianism and the antidote to open theism.” (29)

Jeremy Bouma
Jeremy Bouma (Th.M.) has pastored on Capitol Hill and with the Evangelical Covenant Church in Michigan. He founded THEOKLESIA, which connects the 21st century Church to the vintage Christian faith; holds a Master of Theology in historical theology; and makes the vintage faith relevant at jeremybouma.com.
Next Post
eBook Sale: NIV Application Commentaries Just $4.99 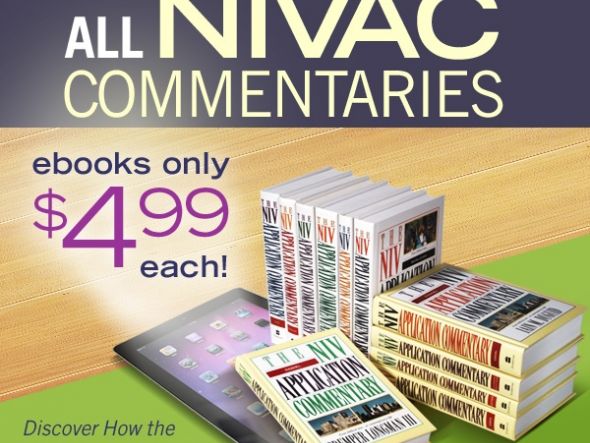 eBook Sale: NIV Application Commentaries Just $4.99 Discover the Bible through this commentary series that helps with both halves of the interpretive task - bringing an anc...
Your form could not be submitted. Please check errors and resubmit.