Christianity and Sexuality: What We Believe, Why We Don’t Believe It 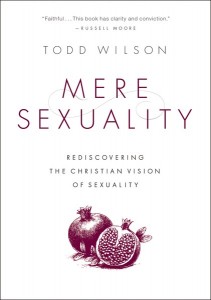 Recently, a number of books have been published grappling with what the Bible and reality says about same-sex practice. Yet pastor Todd Wilson believes there is a crucial gap in these resources:

I don’t think we’ve dealt adequately with the question of homosexuality in the light of God’s design for human sexuality. Instead we’ve addressed the issue too narrowly—at times almost too exclusively in biblical or personal practical terms. (13)

Our approach typically asks one of two questions: What does the Bible say about homosexuality? How can I love homosexuals like Jesus? Although important, these questions miss something: “We need to put the question in a larger theological context” (14).

Enter Mere Sexuality, a cogent, compact book exploring what Christians have always believed about human sexuality. In a culture that's deeply confused about this issue, Wilson believes we must retrieve the ways in which the historic Christian tradition has answered such questions.

But how did we come to needing such a refresher course, and what is mere sexuality anyway? Keep reading to find out.

“How could something so obviously problematic to believers living just a generation ago become so widely embraced today, not least by Bible-believing conservative evangelicals?” (27).

One could blame Obergfell, but that would be far too simplistic. Wilson offers two factors explaining why evangelicals find it easy and necessary to affirm same-sex practice and gay marriage.

First, “evangelicals have experienced a profound loss of functional biblical authority” (28). Wilson explains this loss by the rise of what sociologist Christian Smith calls “pervasive interpretive pluralism.” Essentially, people have witnessed how the Bible can be used to support several views on important issues. When it comes to homosexuality, Christians on both sides use the Bible to justify their position—and then believe no one can really know what the Bible says about this or any number of important issues.

Pervasive interpretive pluralism undercuts the functional authority of the Bible in the lives of these Christians. It’s not that they dispense with the Bible; it’s just that Scripture no longer speaks decisively on many issues…. (29)

Coinciding with this breakdown in biblical authority has been a refashioning of moral intuition. “Our moral intuitions are those pre-theoretical responses we have to particular actions, those gut-level responses that tell us whether something is right or wrong, before we even think about it” (29–30). In previous generations, it was a given that same-sex intimacy was wrong, at the moral intuition level—“It didn’t need to be explained; it just was” (30). Now, not so much—and there's an important reason why:

Unlike their parents, most younger evangelicals know gays and lesbians as classmates and teammates, as colleagues and friends…they’re hard to dismiss as sinful and wrong—regardless of what the Bible says or the church teaches. (31)

Relationships, then, have undermined the “plausibility structure” of historical Christian sexual ethic.

What Is Mere Sexuality?

Most Christians are at least familiar with the “mere” concept given C. S. Lewis’s classic Mere Christianity. For him, mere Christianity was a simple way of referencing the central beliefs of the Christian faith, the ones all Christians agree are basic.

Wilson similarly believes there is a mereness to the Christian vision of sexuality, that there is a historic consensus of beliefs about human sexuality. As he contends:

It has been around for centuries, from roughly the fourth to the middle of the twentieth century. And it has only seriously been called into question within the last forty to fifty years with the liberalization of Christian sexual ethics in the foment of the 1960s sexual revolution. (34)

At the heart of this consensus “is the belief that sexual difference, being male and female, is both theologically and morally significant. It matters to God, and it ought to matter to us” (35). Part and parcel with this central feature of mere sexuality are several more:

These central features of mere sexuality “are the basic contours of what has been a time-honored and widespread consensus on sexual differences with implications that touch virtually every dimension of our lives” (36).

“If you want a book that focuses on what the Bible says about homosexuality, then you should grab hold of the many excellent resources that do just that. But if you want to explore the Christian vision of human sexuality—a vision that, yes, speaks to homosexuality but also to a host of equally vital issues—then keep reading.” (18).

Engage this faithful, readable resource to re-discover for yourself and others the Christian vision of human sexuality. Buy your copy today on Amazon, Barnes & Noble, or Christian Book.