Common Places has been a regular column on the Zondervan Academic blog with a focus on systematic theology. The loci communes or “common places” of Christian theology, drawn out of the Scriptures and organized in a manner suitable to their exposition in the church and the academy, have functioned historically as common points of reference for theological discussion and debate. This column has focused upon the classical loci of systematic theology, not as occasions for revision, but as opportunities for entering into the ongoing conversation that is Christian systematic theology. After a three-year run, this final post concludes Common Places. Thank you for joining the dialog.

1. We live in a day and age marked by the active life. In theological terms, this tendency manifests itself in a proclivity to focus upon conversational theology wherein theological concerns are put to engagement with other areas of discourse. The late John Webster referred to such enterprises as “theology and ...” The various foci today range over many topics: food and finance, politics and gender, race and sex, even sport or recreation.

2. Conversational theology serves a crucial purpose in displaying and exercising the task of moral discernment. Institutions, such as Wheaton College at the undergraduate level or Regent College at the graduate level, provide space for discussion of every facet of life within Christian terminology; similarly, periodicals such as “Books and Culture,” “Comment,” and “First Things” seek to broker such ongoing conversation. At its best, such endeavors attend to both of God’s books: that of nature and that of scripture. At their best, such endeavors also acknowledge that Thomas Aquinas was right to perceive that theology addressed not only God but also “all things in God.”

3. We also live in a culture wherein the contemplative task has been frequently dismissed or denigrated. Evangelical Christians, owing to their activistic impulse (on which see Nathan Hatch’s “The Democratization of American Christianity” or the chapter on politics in Mark Noll’s “The Scandal of the Evangelical Mind”), frequently match the anti-metaphysical concerns of mainline, revisionist Christians in denigrating the contemplative task. Evangelical activism and American pragmatism combine to form a brutally mindless conversational convention in the public sphere.

4. Conversational theology without contemplative, metaphysical alertness will be blind. Too often Christians bring precious little by way of biblical and doctrinal formation to those engagements with other intellectual terrains. Not surprisingly, their endeavors can be marked far more by the language of Babylon than that of Zion. Oftentimes, far from following the medieval practice of reducing all things to God (that is, tracing them back to him as their source, sustainer, and end, à la Rom. 11:33), they are simply reductive.

5. The disciplines of exegetical and dogmatic theology, then, serve as abiding concerns for the church, especially for her teachers who exist to “equip the saints for the work of ministry, for building up the body of Christ” (Eph. 4:11-12). They provide structures and protocols to ensure the patient, repentant posture of docility before the Word, prior to the active engagement of other concerns with the implications of that Word.

6. These disciplines exist for the sake of life before God and amongst our neighbors, such that we can and must also say that contemplation without conversation about how holiness, justice, and truth relate to every venture and all spheres of life would be empty. The mystic and the contemplative, the dogmatician and the exegete, has only truly seen the beauty and profundity of God (the height, width, depth, and breadth of God’s love) when they are then drawn into the very mission of God himself.

7. The disciplines of exegetical and dogmatic theology exist not only for the teachers of the church but, ideally speaking, for laypersons who will also play a key role in extending the Word one to the other in worship and witness. These disciplines help instill wisdom (paideia) that they might do so in ways befitting the gospel of Jesus Christ.

8. Theologians, those who serve in this role ecclesiastically and, by extension, professionally, do well then to render their work not only at the highest levels of intellectual rigor so as to pursue true mortification of the still sin-decayed mind, but also to communicate their work in the widest possible forums so as to make the laity wise unto discernment. The work of the philosopher won't be running anywhere, we might say, without the profundity and profession of the poet.

9. If the 500th anniversary of 1517 reminds us of anything, surely one key element ought to be the way in which Luther (especially, though not singularly) sought not only to critique the faith and practice of the church in light of God’s Word at the highest intellectual level but also to communicate through various media to extend that illumined perception to other teachers and indeed to the laity (see especially the works of Andrew Pettegree, most recently his book Brand Luther). Luther not only wrote disputed theses and thorough tomes, but did most of his thinking in the form of the sermon and the rubric of the hymn.

9.5 Such has been our goal with this column, but for everything there is a season. Common Places, requiescat in pace.

Scott Swain (PhD, Trinity Evangelical Divinity School) is President and James Woodrow Hassell Professor of Systematic Theology at Reformed Theological Seminary in Orlando. He is author of several books, including The God of the Gospel and Trinity, Revelation, and Reading. He serves as general editor (with Michael Allen) for Zondervan’s New Studies in Dogmatics series. He is a regular blogger at Reformation21.

Get the PDF here. (It includes the first 3 series of Common Places, about 100 pages of content). 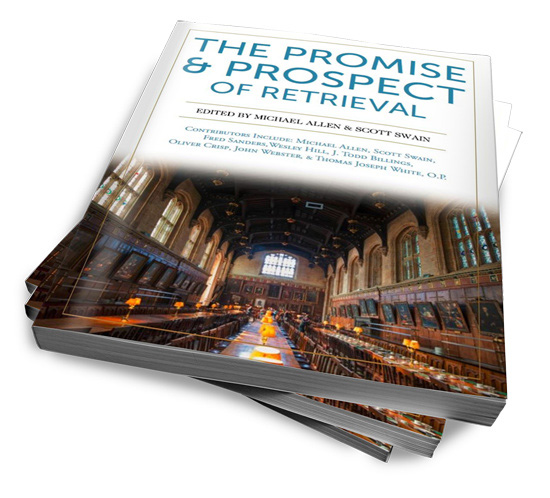