The harder part of theology can oftentimes take the form of bringing into relief that which we are most likely to overlook. We miss things for a variety of reasons. Sometimes we miss things because they are so foreign or odd to us, whether they are literarily odd or culturally exotic. We may even know that they are baffling and, therefore, avoid them altogether. Sometimes we miss things because they seem so straightforward and familiar. We presume that a word in the Bible means just what it might in our ordinary experience, as if the fact that it was written in koine Greek means that it is completely common and totally transparent.

Theology must make strange some of our readings, then, for the sake of hearing the Word which confronts us. The Word itself takes up human language and imagery in commending the good news of Jesus, precisely because the center of that message is a human like us and because the end of that message is human knowledge and love of that Incarnate Savior. But this news is good in as much as it is strange. Its singularity involves its oddity. Indeed, we can say that the extent to which it is good news, it must be mysterious and strange news. Anything less challenging to our presumptions would not, by definition, be different enough to make a difference in our situation.

Being Alert to the Strange and the Subtle

Seasons of church life have been marked by an alertness to this strange word of grace. Early Christians took great care in discipling converts through a lengthy, serious season of catechesis, aware that these men and women might be tempted to treat the God of Israel and the divine Messiah as yet another god to be added to the laundry list of gods that function like nothing more than a litany of service-providers. So they labored long and hard, intellectually and spiritually, to commend the singularity and uniqueness of the triune God and the totality of his calling upon our lives. Such intentional evangelism and discipleship has not always been the order of the day, as times and places have let their guard down.

Those of us journeying through life in the modern West have found ourselves in a strange situation. Churchly and cultural observers such as Lesslie Newbigin, Darrell Guder, Alasdair MacIntyre, and Charles Taylor have noted ways in which the secular has found its way in which the society of the saints. It is far too easy to presume that Christian terminology will be heard aright, when, truth be told, men and women learn their language in the land of “expressive individualism” and grow up as what Philip Rieff called “psychological man.” If we are to help commend the beauty of Christ, offer a balm for that which truly ails, and help folks count the cost, then we need to draw into stark relief the way in which the gospel confronts us. We dare not allow the sharp lines of the gospel to blur in the subtle ambiguities of seeming familiarity.

Among the many blessings of Christ, the gift of sanctification can easily be misperceived. Sanctification can easily be understood as conformity to group norms. Mary Douglas has studied the kinds of mores that mark out purity according to various social groupings, especially though not exclusively those of religious sorts. In an earlier generation, Rudolf Otto focused more on exuberant religious experience of particular significance, such as Luther’s mysterium tremendum or Wesley’s experience of being heart-struck in Aldersgate Chapel. Whether focused on cultural expectations of behavior modification or of expressive affection, sanctification can easily become a term connoting human conformity.

The Witness of John Webster

In the midst of such assumptions, John Webster’s sketch of “The Holiness of the Christian was so helpful. This essay was the final chapter in his little book Holiness published in 2003 (which remains my favorite volume of his for its homiletical force, even if it does not display the most mature version of his doctrinal thought). This chapter followed earlier entries on the holiness of theology, of God, and of the church. As was his custom, Webster offered a thesis which he then exposited: “The sanctification of the Christian is the work of the Holy Trinity in which the reconciled sinner is renewed for the active life of holy fellowship with God. Grounded in the electing , reconciling and perfecting work of Father, Son and Spirit, the active life of holy fellowship is the work of faith, which is at every moment characterized by mortification and vivification, and which is actual as freedom, obedience and love” (pp. 78-79).

Several things have stood out to me in his account. First, his depiction of sanctification takes in the wide range of divine gift, so that it cannot be reduced merely to the Spirit’s work (as often occurs in even pristinely orthodox and devoutly evangelical accounts this side of Great Awakening and of the influence of the charismatic movement). Webster makes sure to locate sanctification – and the transformation of the self – in a much grander movement where the triune God acts for our glorification. Both the self and the story of redemptive history need to be illumined by drawing into relief the agency of the triune God in their midst. Second, Webster takes up a number of terms that we would be so prone to presume upon and works to bring their Christian integrity into clear display. Terms such as reconciliation, justice, holiness, freedom, law, love, vocation, obligation, and responsibility demand attention and deserve more than the ethic of assumption, which simply goes about its business expecting that Christ merely addresses our felt needs and our assumed desires. Webster showed how we might tend to them, patiently and expectantly, finding not only answers but better questions yet. He did so for he knew the triune God is not only one who redeems us from our sin, but a King who brings us to a greater glory than we had ever known. There was an eschatological urgency which marked the pages of this little book, hearkening one back to the prayer of Paul that even those beloved saints addressed in Ephesians might “be strengthened with power … that you, rooted and grounded in love, may have strength to comprehend .. and to know the love of Christ that surpasses knowledge, that you may be filled with all the fullness of God” (Eph. 3:16, 18, 19).

The Missiological Importance of Thinking Systematically about Sanctity

In writing Sanctification for the New Studies in Dogmatics series, I sought to extend this kind of exegetical and conceptual attentiveness modelled so well by Webster (and elsewhere by Oliver O’Donovan’s contributions to theological ethics). I sought to practice Christian doctrine with a missiological alertness so as to draw into greater relief the ways in which the gift of holiness is remarkable news precisely because it is notably different from our ordinary experience. In that strangeness lies the hope which it brings. In that strange also comes the need for us to be patient, teachable, and alert. While a heavily Christian culture might be able to coast without constant attention to issues of definition and coherence, a situation such as ours in the modern West demands the practice of attentive systematic theology for the sake of genuine missiological faithfulness.

Michael Allen (Ph.D., Wheaton College) is the John Dyer Trimble Professor of Systematic Theology at Reformed Theological Seminary in Orlando. He is the author of numerous books and articles and serves as a Presbyterian teaching elder. With Scott Swain, he serves as general editor for the New Studies in Dogmatics series published by Zondervan Academic. Pre-order Sanctification by Michael Allen at Amazon, Barnes and Noble, and ChristianBook.com.

Michael Allen
Michael Allen (Ph.D., Wheaton College) is the John Dyer Trimble Professor of Systematic Theology at Reformed Theological Seminary in Orlando. He is the author of numerous books and articles and serves as a Presbyterian teaching elder. With Scott Swain, he serves as general editor for the New Studies in Dogmatics series published by Zondervan Academic.
Next Post
Software Sale: 50% Off Expositor's Bible Commentary, Original and Revised Editions 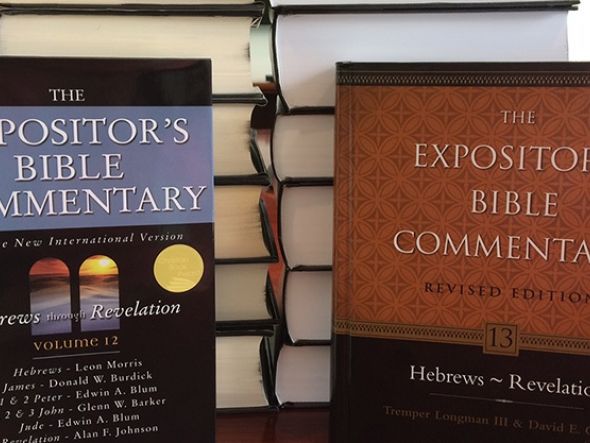