One of the harder things to do in translation is line up the phrases properly. Since English uses sequence and proximity, related phrases need to go together. Greek doesn’t care (as much).

Take for example Rom 1:5. Speaking of Jesus, Paul writes, “through whom we have received grace and apostleship to bring about the obedience of faith for the sake of his name among all the nations” (ESV). The Greek is, δι᾿ οὗ ἐλάβομεν χάριν καὶ ἀποστολὴν εἰς ὑπακοὴν πίστεως ἐν πᾶσιν τοῖς ἔθνεσιν ὑπὲρ τοῦ ὀνόματος αὐτοῦ.

The prepositional phrase translated “to bring about the obedience of faith” (εἰς ὑπακοὴν πίστεως) is adjectival, modifying “grace and apostleship” (χάριν καὶ ἀποστολήν); it is the end result of God’s grace and his apostolic call.

“Among all the nations” (ἐν πᾶσιν τοῖς ἔθνεσιν) modifies πίστεως showing the extent of the working of grace, that extends through Jews to Gentiles (or it too goes back to χάριν καὶ ἀποστολήν as the second modifier).

So why did the ESV separate “for the sake of his name among all the nations” and move it to the end of the sentence?

The answer is in the prepositional phrase, “for the sake of his name” (ὑπὲρ τοῦ ὀνόματος αὐτοῦ). Even though it comes at the end of the Greek sentence, contextually we can see that it is not telling us something about the Gentiles (ἔθνεσιν) but rather the ultimate reason for faith; our faith is ultimately for Christ and his name (or ὑπὲρ τοῦ ὀνόματος αὐτοῦ could be the third modifier of χάριν καὶ ἀποστολή).The Greek prepositional phrase can be moved to the end of the sentence without a problem, and the Greek reader will connect it to the right word.

English can’t do that. We have to keep modifiers close to the word they modify, if not right next to it. So the ESV moves it forward in word order, “the obedience of faith for the sake of his name among all the nations.”

William D. [Bill] Mounce posts about the Greek language, exegesis, and related topics on the ZA Blog. He is the author of numerous works including the recent Basics of Biblical Greek Video Lectures and the bestselling Basics of Biblical Greek. He is the general editor of Mounce's Complete Expository Dictionary of the Old and New Testament Words. He served as the New Testament chair of the English Standard Version Bible translation, and is currently on the Committee for Bible Translation for the NIV. The Mounce Reverse-Interlinear™ New Testament is available to freely read on Bible Gateway.

Bill Mounce
Bill is the founder and President of BiblicalTraining.org, serves on the Committee for Bible Translation (which is responsible for the NIV translation of the Bible), and has written the best-selling biblical Greek textbook, Basics of Biblical Greek, and many other Greek resources. He blogs regularly on Greek and issues of spiritual growth. Learn more about Bill's Greek resources at BillMounce.com.
Next Post
Software Sale: Biblical Greek & Hebrew Resources Are 50% Off 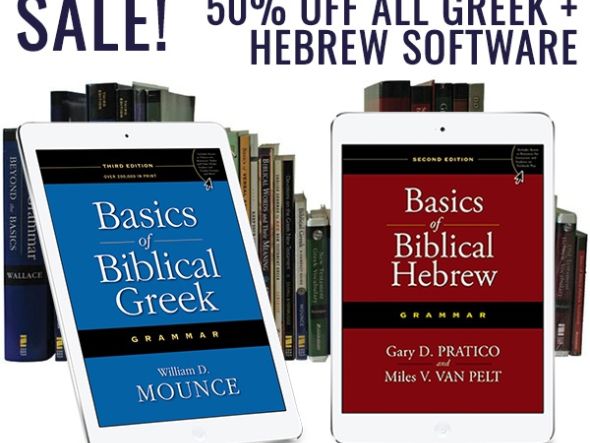 Software Sale: Biblical Greek & Hebrew Resources Are 50% Off Software Super Sale: Zondervan Greek and Hebrew Software is 50% off! Explore the Old and New Testaments through the lens...
Your form could not be submitted. Please check errors and resubmit.