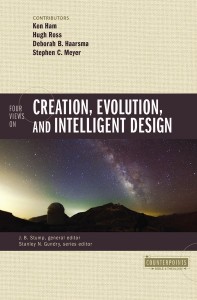 Discoveries in cosmology, paleontology, and genomics has considerably changed the context for the creation-evolution debate in the last two decades. Which is why an update to the first Counterpoints views book on the subject is needed.

Editor J. B. Stump has brought together leading voices to offer an accurate snapshot of the origins conversation in America in his new book Four Views on Creation, Evolution, and Intelligent Design. Voices include: Ken Ham (Answers in Genesis), Hugh Ross (Reasons to Believe), Deborah B. Haarsma (BioLogos), and Stephen C. Meyer (The Discovery Institute). Offering their best defense of their position, each address questions such as:

Although “creationist” is often used narrowly, Stump uses it more widely “as one who believes that God is the creator,” making all the contributors creationists. There’s a reason he made this choice:

Below we’ve briefly outlined these four views and a unique insight into their contribution, hoping it will not only give you a taste of the book's discussion but will inform your own views on creation, evolution and intelligent design.

Although Ken Ham acknowledges “God’s creation speaks to us non-verbally about His existence and attributes,” Ham begins and ends with Scripture: “we start our thinking about origins (as in all other areas) with Scripture, God’s inerrant, holy Word” (19). He offers several arguments for his view from this starting place:

Ham contends science evidences these arguments, and he offers several examples. However, his main point is: “The Bible clearly teaches young-earth creation.” Which for Ham is also a salvation issue: “Christians who compromise with evolution and/or millions of years are, contrary to their intentions, encouraging others toward unbelief concerning God’s Word and the gospel” (45).

Taking his cues from the Belgic Confession, which declares the natural realm to be a “most elegant book”, Hugh Ross contends “Both Scripture’s words and creation’s works originate from the One who is truth and reveals truth” (71) and while both the Book of Scripture and Book of Science are subject to interpretation, we can use these each to understand God’s creation.

old-earth creationists anticipate God’s “two books” will prove consistent internally, externally, and mutually. One provides more detail on the redemptive story, the other more detail on the creation story, but they speak in perfect harmony. Neither negates or undermines the other. (71)

Hugh calls his day-age approach “constructive integration,” for it “anticipates a straightforward, harmonious integration of Scripture’s book with nature’s record, rather than a nonexistent overlap or minimal overlap" (76). He goes into detail how both records support this model, as well as some challenges.

Deborah Haarsma holds together in tension these seemingly competing claims: “Evolution is real. The Bible is true” (124). Like Ross, she embraces the Belgic Confession’s two-book reading of nature and Scripture, believing “God’s two revelations cannot conflict, since he speaks truly in both” (127).

Not only does she offer readings of both Books, uniquely she engages the theological implications if evolution is true, including: the image of God, original sin, death and the fall, meaning and purpose. Though she acknowledges "evolution touches on central doctrines," she concludes: "the stakes may not be as high as they look at first" (148).

Her chapter shows “evolutionary creation is a reasonable option for serious scientists. This view accepts the scientific case for evolution while showing that it need not lead to rejection of God or a nihilistic worldview” (153).

Although intelligent design has been called “creationism dressed in a tuxedo,” Stephen Meyer knows such ad hominems are far from accurate.

unlike creationism, [intelligent design] is not based upon the Bible. Instead, the theory is based on recent scientific discoveries and what we know about the cause-and-effect structure of the world—specifically, what we know about patterns of evidence that indicate intelligent causes” (179).

Meyer leverages the important discoveries and improbable properties of DNA that point to an “intelligent cause.” Importantly, he engages the philosophical objections that claim the theory is merely “religion masquerading as science” (207). He shows otherwise.

“Though intelligent design is not based upon religious belief,” he argues, “it does affirm a key tenet of a biblical worldview—namely, that life and the universe are the products of a designing intelligence…” (207).

“Beyond the scholarly goal of showing the state of the debate, I hope this book facilitates gracious dialogue between Christians with different viewpoints.” (16).