Many of us have been there.

We have the best of intentions when sharing the good news of Jesus with someone, yet the result is a sour mixture of offense, anger, and hurt.

In Talking with Catholics about the Gospel, author Chris Castaldo shares an evangelism experience he had where he realized "I still hadn’t learned that there is a quality of communication that goes deeper than mere information — a way of speaking that conveys gentleness, even in the face of disagreement."

Castaldo is deeply burdened to equip Evangelicals for more fruitful spiritual conversations with Catholics. His story below gets at one of the book's central questions:

How can we preach the realities of life and death with passion and urgency, and yet not sound irritating?

Read Cataldo’s story below to discover the answer he himself discovered—and from a kind-hearted Monsignor, no less!

It was a poor decision, probably the result of too much espresso. But then, I was in good company. It all started at a Seattle’s Best café in Chicago. In the warm glow of a fireplace, with the aroma of freshly ground beans wafting in the air, some college buddies and I were busy planning. The previous summer we had visited the Atlanta Olympics to perform street preaching at Centennial Park. Returning to our campus in the fall, we started “Student Outreach,” an evangelism ministry to the pedestrians along and about Michigan Avenue, Chicago’s busiest tourist thoroughfare.  The three of us sat there wondering, Where can we find a captive audience?

Gathering our coats, we exited to the abnormally frigid November air. Immediately, we discovered a large crowd standing on the sidewalk, four or five people deep and stretching eastward toward Michigan Avenue. The sound of a thousand blended voices testified to its immensity. I turned to a woman with a scarf wrapped around her face and inquired, “Where’s the party?”

“It’s a funeral,” she responded.

Her look of incredulity said that I must be the most uninformed person in all of Chicago. Cardinal Joseph Bernardin, the city’s archbishop, had died of cancer the previous Thursday. People the world over had come to whisper a final prayer and bid him farewell. And indeed, it seemed as if the entire city of Chicago, Catholic and non-Catholic alike, was on the street that night.

Astonishment gave way to a certain realization. I turned to my classmates. “What a large crowd.”

“You might call them a captive audience,” Jimmy responded. Our eyes grew large with excitement. “You guys are nuts,” said Steve. “Surely, you don’t mean to preach outside the funeral.”

“Steve, do you believe that God is all powerful?” Jimmy countered.

Low clouds from the west were bringing darkness early. I looked down at a dead leaf poking up through the snow; and then, with more drama than the moment required, I broke the silence. “People are headed toward eternal separation from God,” I said, “and we have the message to save them. Shame on us if we don’t preach the gospel.”

In the growing winter darkness, we marched off to Holy Name Cathedral. I tried to imagine the various directions the evening could take. The optimist in me envisioned massive conversions; the realist in me, however, was fearful…The expectation of heaven or fear of hell couldn’t adequately explain the audacity of our decision: the corner of State Street and Chicago Avenue was directly adjacent to the cathedral where Cardinal Bernardin’s funeral was taking place. Literally a stone’s throw from the church entrance, we were as close to the ceremony as was possible without getting arrested for disrupting the peace. There’s a Yiddish word for such boldness: chutzpah.

While fastening the easel to a pole, the sound of cold engines idling on the street behind us filled my ears. The cars’ exhaust was so thick you could taste it. People looked on curiously as we fastened the paint tray to the easel. The evening moon, pale through the clouds, hung above us as I stepped forward to preach the first sermon.…I painted a crude picture of a tombstone, stepped beside the easel, and launched into my message…

War is ugly, especially when you get in the trenches. On the field of battle, you look into people’s eyes and see their intensity, their gnashing teeth, their angry hearts. The scenario before us was beginning to look like a war zone. Farthest away, in the outer circle of the crowd, was a man with a large mustache and a leather jacket. “Go home, fanatic!” he yelled. Behind him was a cleric wearing an enamel lapel badge displaying a diocesan emblem. His mournful eyes — moist and sleepless — grabbed my attention. A woman wearing a large crucifix raised her hand and shouted, “May the Mother of God have pity on you!”

Closer to me, I spotted a nun wearing a traditional habit. When our eyes met, I could not easily dismiss the kindness in her face. I felt conflicted and puzzled over the strange mixture of responses. A few other comments rang out, and then, for a moment, there was silence. It was as if we had all run out of breath or forgotten how to speak. I was aware that something needed to be said to defuse the situation, but I was at a loss for words. I still hadn’t learned that there is a quality of communication that goes deeper than mere information — a way of speaking that conveys gentleness, even in the face of disagreement.

Frozen and disillusioned, I turned to Steve. “It’s your turn.” His face held an expression of dread as he swallowed hard and stepped forward. With the unpleasant fallout of my message in plain view, Steve decided to take a different approach. He replaced my tombstone art with a fresh piece of paper and proceeded to write two questions on it:

“How do you spell divine love?”

“What is the greatest gift?”

Wiser and more winsome than I, Steve sought to emphasize the gracious character of God. Pacing to and fro with his lanky arms extended, gesturing according to his characteristic rhythm, Steve punctuated each segment of his sermon with the same phrase, “What kind of love is this?”

..I started to reflect more deeply on the responses to my sermon. With the friendly nun’s face in my mind and Steve’s refrain concerning love in my ears, I had a new thought: How can we preach the realities of life and death with passion and urgency — and a life-giving spirit — and yet not sound irritating?

Then another thought crossed my mind. It had been the subject of the previous Wednesday’s biblical theology lecture — the concept that God is love. Professor Laansma had emphasized that hesed, the Hebrew word used most frequently in the Old Testament to describe God’s love, often translated as “loving- kindness” or “steadfast love,” is a selfless love, one that looks out for others regardless of the circumstances. It then dawned on me — the realization that my preaching had expressed grace in a graceless voice, a message of divine love conspicuously devoid of affection.

I looked into the faces of Steve and Jimmy, who read my mind and responded, “Yeah, I think it’s time to go.” As I was packing up the easel, a man wearing a fedora and black scarf, whose wrinkled face revealed his age, approached me with outstretched hand and introduced himself as Monsignor Morris.

“Please understand,” he said, “the suggestion that we Catholics are outside of Christ and that your particular denomination has the corner on truth is difficult to swallow. Let me encourage you to remain excited for Jesus, and, at the same time, equally committed to loving people, for these are the two great commandments — to love God and love your neighbor.”

With that, the monsignor smiled and walked off.

Talking with Catholics About the Gospel

Jeremy Bouma
Jeremy Bouma (Th.M.) has pastored on Capitol Hill and with the Evangelical Covenant Church in Michigan. He founded THEOKLESIA, which connects the 21st century Church to the vintage Christian faith; holds a Master of Theology in historical theology; and makes the vintage faith relevant at jeremybouma.com.
Next Post
Get Your Beard On: An eBook Sale of Bearded Christian Authors 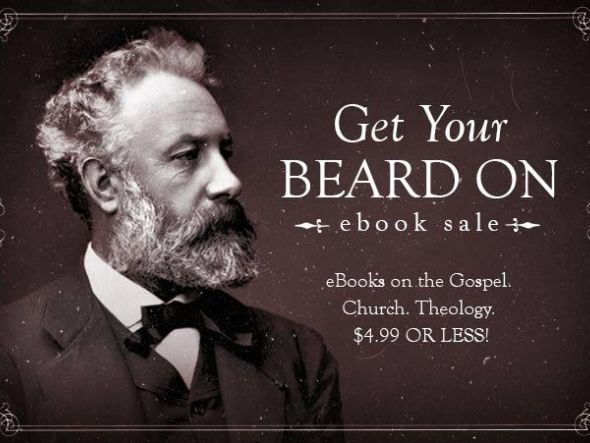 Get Your Beard On: An eBook Sale of Bearded Christian Authors Yes, you read that right: A sale of spectacular reads by your favorite bearded Christian authors! We're calling it the G...
Your form could not be submitted. Please check errors and resubmit.