"This is, perhaps, one of the most pressing ethical questions facing the church today." Referring to the issue of same-sex attraction, Preston Sprinkle says in People to Be Loved, it's "not about what the Bible says but what the Bible means." But one step beyond the issue of interpretation is how should we interact with others who hold differing views? As difficult as it is, Sprinkle encourages us to listen well and love well in this excerpt.

This is by far one of the hardest questions I’ve had to think through as I wrestled with this topic. It’s one thing to weep with those who experience same-sex attraction but think it’s wrong to act on it. But what about those Christians who have studied the Bible and disagree with my interpretation? They love Jesus, believe in God’s Word, and yet interpret the passages we’ve looked at differently. They believe that consensual, monogamous, faithful, loving, Christ-centered marriages between same-sex couples can be God-honoring.

This is, perhaps, one of the most pressing ethical questions facing the church today. A couple of decades ago, affirming Christians were a small minority. Today, a growing number of evangelical believers affirm the sanctity of monogamous same-sex unions. My guess is that it won’t be long before nonaffirming Christians will be in the minority. Whether we realize it or not, the evangelical church is on the verge of a catastrophic split. People on both sides of the debate need to think deeply about how they view those on the other side.

Are affirming Christians heretics? Wolves in sheep’s clothing? False prophets? Or is this a secondary issue that believers can disagree on—like keeping the Sabbath and baptism—and still join hands in worship? Does it come down to a simple disagreement on how to interpret a few passages? Or is it a gospel-issue that is a threat to orthodoxy?

I don’t think I can chisel my answer in stone just yet. I am still working through all the implications of my (ongoing) study, and I am sure I will be thinking through this question for many years to come. To be clear, the more I study the Scriptures, the more I am convinced that the Bible doesn’t sanction same-sex unions. But that doesn’t in itself answer the question about how to relate to those who disagree. So instead of codifying my thoughts on Sinaitic tablets for all to obey, let me offer some conversational reflections that may help you think through this all-important question: How should nonaffirming Christians view their affirming brothers and sisters? And are they brothers and sisters?

It’s important to note that not all affirming Christians are the same. This point seems so obvious that I hesitate even saying it. But I still hear people talk about affirming Christians as if they are all from the same womb. Affirming Christians are not all the same. They may all affirm consensual, monogamous, same-sex relations, but they may have arrived at this view for many different reasons. I’ve met some people who don’t really care what the Bible says. Experience and science (or a distorted and naive view of science) is their authority. Their Bible is: “Gay people are born gay; therefore, it’s right for them to act on it,” or “It would be unloving to tell a gay person that they can’t act on their desires,” or “If I marry a person of the same sex, God will forgive me, so I’m going to go ahead and do it.”

None of this is Christian logic, and it makes God out to be more of a sexy cheerleader on the sidelines than the King of creation who commands our morality. Before you make a judgment call about affirming Christians, you should find out why they are affirming, since not all affirming Christians ignore the Bible and crown human desire as the lord of right and wrong.

I’ll never forget reading Justin Lee’s account of how he arrived at an affirming position. It blew my socks off. Justin was raised in a healthy, loving, conservative Christian family and has been sold out for Christ since he was young. But when he hit puberty and was overwhelmed by same-sex attraction, he was devastated. He spent night after night, weeping and praying that God would take these desires away. Still, he remained attracted to men. Finally, Justin set out to truly study what the Bible said. He recalls:

If God was calling me to celibacy, I would be celibate, but I needed to be sure. To settle this issue once and for all in my own mind, I had to ignore the half-baked ideas on both sides and go straight to the source—not just a quick perusal of what the Bible had to say, but an honest, prayerful, in-depth study.15

As I read Justin’s testimony, I couldn’t help but wonder how many nonaffirming Christians have had such a humble and open posture toward God’s Word? How many traditionalists have come before God with a clean slate and said: "God, whatever your Word says, I will believe it. I’m going to thoroughly study your Word and see what it actually says about homosexuality. And whatever it says, I will believe—at all cost."

I know of only a few.

But Justin did this, and he ended up leaning toward an affirming view…any true Bible-believing Christian should be impressed with his heart and humility. From what I can see, it seems like he has a high view of Scripture, submits to its authority, embraces the gospel, and loves Jesus. Maybe he doesn’t. Maybe he’s an impostor. Maybe you are an impostor. Only God knows. I just don’t think it’s healthy to sweep every single affirming Christian under the same rug of heretics that don’t believe the Bible. As I have said before, the debate is not about what the Bible says but what the Bible means.

I know some of my nonaffirming Christian brothers and sisters will disagree. But I still think there is room for dialogue and fellowship with those who hold different views on this topic. (Pgs 150-152)

As you've found yourself drawn into the tension Sprinkle enters so well, consider ordering a copy of People to Be Loved for yourself. 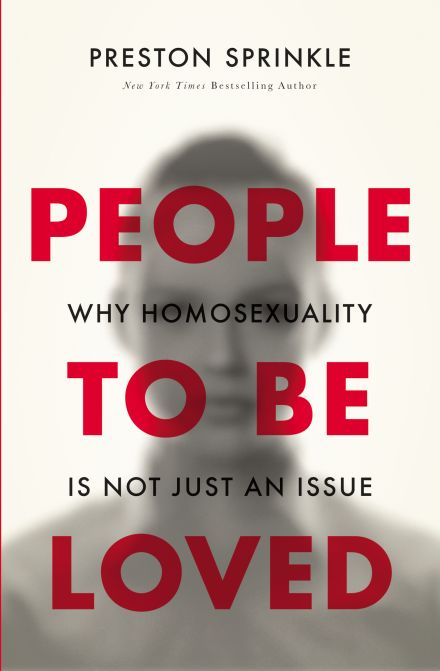 People to Be Loved Preston Sprinkle
This is a remarkable book. The tone overflows with love, compassion, and grace. Preston is an exceptional biblical scholar, and as such, his exegesis of Scriptu...
Softcover
Not Available Request an Exam Copy
Next Post
[Common Places] On Cultural Liturgies: A Theological Analysis
[Common Places] On Cultural Liturgies: A Theological Analysis With a new year comes an opportunity to venture into fresh territory with old resolve. For Common Places, this journey b...
Your form could not be submitted. Please check errors and resubmit.