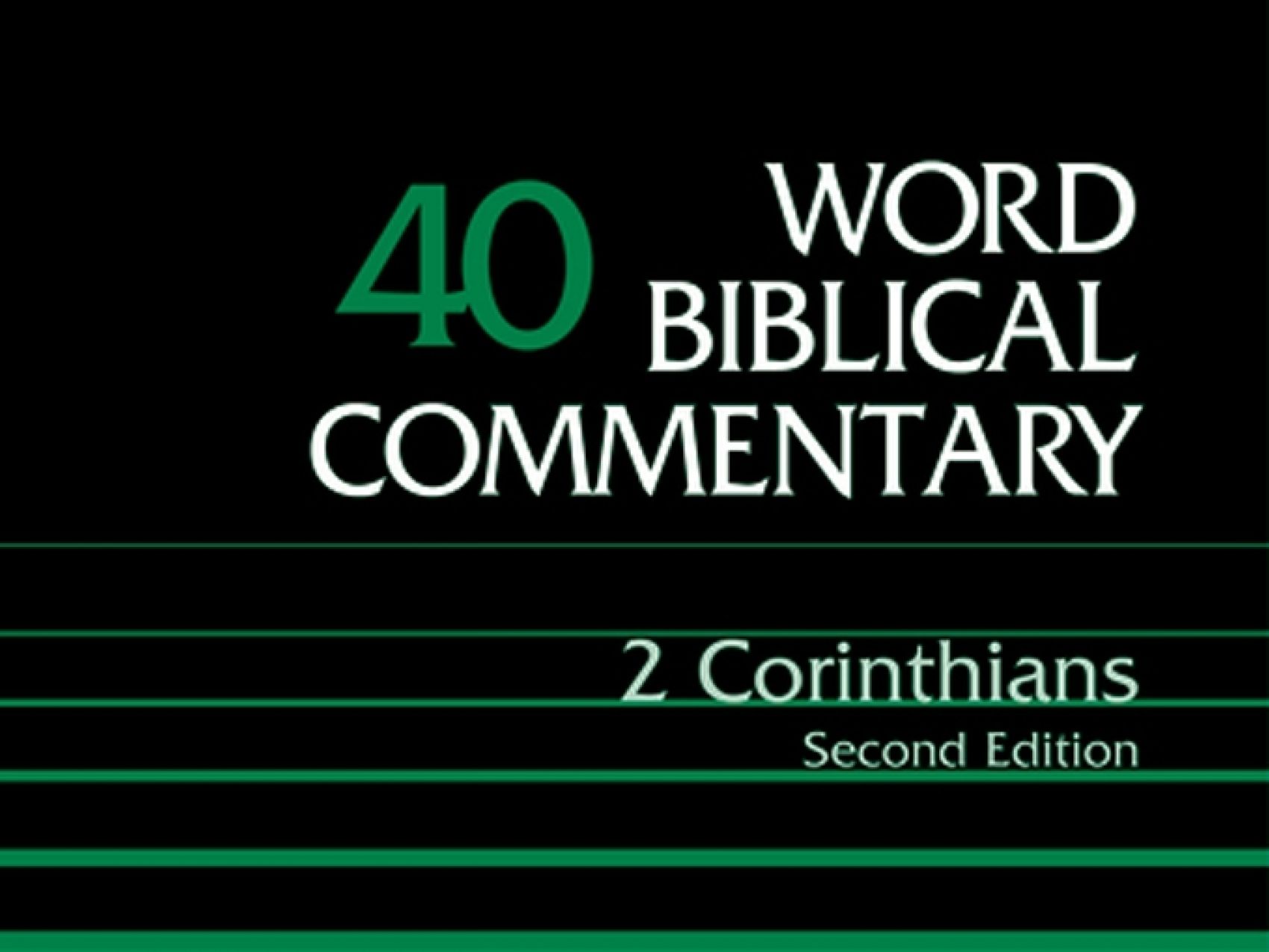 There are some who insist Paul’s second letter to the Corinthians isn’t a source of early Church history, believing it to be a “locally directed polemic” with strong “personal factors.” (71) Ralph Martin disagrees.

In his newly revised commentary on 2 Corinthians (2nd Edition), Martin argues “the contents and chief emphases of 2 Corinthians are best appreciated by setting the letter in a historical and theological Sitz im Leben in Paul’s missionary career.” (71) Thus not only is 2 Corinthians a source of early Church history, it’s historical setting should come to the aid of our exegesis.

Martin largely constructs the flow of events leading to the letter’s composition from the Acts of the Apostles. His introduction’s “Setting of 2 Corinthians in Paul’s Life” provides a fascinating lens through which we exegetes should consider viewing Paul’s letter. According to Martin, several events from Acts and beyond influenced Paul, and subsequently his second letter to the Corinthians.

Martin identifies the so-called famine visit of Acts 11:27-30 as an origin point for our setting. This visit “was intended to forge a link of practical support and concern between the mother church in Jerusalem and the mission areas of Paul’s ministry.” (71) Martin notes if this was the events of Galatians 2:1-10, "it will follow that a concordat was reached by which the 'pillar' apostles and Paul agreed on spheres of service (cf. 2 Cor 10:12–18) and tacitly refused to accept the insinuations of the 'false brothers' who sought to infiltrate the ranks of Gentile congregations in Galatia as agents provocateurs (Gal 2:4–5)." (71)

2) The Council of Jerusalem

The resulting agreement "led to the outbreak of Judaizing opposition to the Pauline mission, with the center of the controversy the question of circumcision.” (71) In response Paul and Barnabas were delegated by the Antiochenes to go to Jerusalem and the so-called Council of Jerusalem. While the Council's “decree” sidestepped the question of circumcision, Martin believes it was the less heated topic of table fellowship among Jews and non-Jews that contributed to aspects of 2 Corinthians: Paul’s mission preaching in Acts 13–14 and the resulting decree in 15 “opened the door to the evangelization of pagans en masse.” (73)

3) The Confrontation with Peter

Such evangelization resulted in increased consternation among Jewish Christians, eventually leading to the confrontation between Paul and Peter. “[Paul] regarded Peter’s tame acceptance of Jewish Christian pressure as intolerable; it was nothing short of a move away from ‘the truth of the gospel’ (Gal 2:5), agreed upon in the working arrangement of the earlier concordat.” (74) Martin suggests Paul was resistant to the final decree from the beginning, (74) believing three aspects of it would have made it distasteful to him: its Mosaic character, its ethnocentrism, and its Levitical code observance.

“The Paul who wrote 2 Cor 3:1–18…is hardly likely to have been enthusiastic at a formulation of Christianity that served only to accentuate both the Jewishness and exclusiveness of that faith on ritualistic grounds. So Paul was driven to conclude that the decree was an attempt to put the clock back and to turn the course of the Christian mission into antiquated channels.” (74)

Martin argues the above flow of events, particularly the latter one, “had far-ranging repercussions for Paul in his missionary vocation based on theological convictions…”

“So we reach, by this circuitous route,” Martin writes, “the occasion of 2 Corinthians and its Sitz im Leben in Paul’s missionary career." (76)

One result of this "train of events" was Paul's apostolic confidence through his stand against Jewish Christians. Perhaps the most consequential, however, was Paul’s theology of the cross in response to his own long road of suffering and humiliating circumstances:

“Crucified in weakness” (2 Cor 13:4), Christ achieved salvation by surrendering his glory, by self-giving in taking the slave’s condition, and by obedience to death. Paul’s language coheres precisely with this new insight born out of the experiences that came to him at this crucial time in his life and career.

Martin believes Paul's power-in-weakness theology was forged through "his own experience of isolation from earlier missionary support, the nature of the Corinthian crisis that struck a blow at his apostolic authority, and his need to redefine the gospel in terms of a clear distinction from Judaism and Jewish Christian ideology." (77)

Furthermore, the practical application of the kerygma of the cross means the Church’s identity is as a suffering people. “[The] title to service is written in Paul’s own self-designation as ‘dying with Christ’ (2 Cor 4:10, 11; 2 Cor 13:4).” (79) Paradoxically for Paul, that place of weakness is also the seat of his apostolic authority (2 Cor 10:8; 13:10), “but it is power harnessed to the service of love in seeking to build up, not pull down, and enlisted to encourage people to grow in the maturity of faith (2 Cor 1:24).” (79)

In concluding his fascinating exposition of the setting of 2 Corinthians, Martin writes:

Here we may see the sequence of historical happenings that brought Paul to a lonely place. When viewed in a theological frame of reference and seen…’under the aspect of eternity,’ the events that led him to face the Corinthian crisis produced, in the alchemy of divine overruling, a magnificent exposition of what the Christian life is all about, how the church of Christ should see its existence and mission in the world, and the ways that Christian service in a true apostolic succession should be spelled out in this and all generations. (79)

Martin's revised commentary is an invaluable resource on Paul's letter. Click here to add it to your library today!

Jeremy Bouma
Jeremy Bouma (Th.M.) has pastored on Capitol Hill and with the Evangelical Covenant Church in Michigan. He founded THEOKLESIA, which connects the 21st century Church to the vintage Christian faith; holds a Master of Theology in historical theology; and makes the vintage faith relevant at jeremybouma.com.
Next Post
When Is "Them" Confusing? (Luke 9:26) — Mondays with Mounce 240
When Is "Them" Confusing? (Luke 9:26) — Mondays with Mounce 240 There is no question that "they" is becoming the pronoun of choice to refer back to either a singular or plural antecede...
Your form could not be submitted. Please check errors and resubmit.