Should Your Church Go Multisite? Is it Biblical?

It seems everybody is doing it these days, but is this the right solution for your congregation?

In today's excerpt from MultiChurch, authors Brad House and Gregg Allison explain that multisite is not only a biblically sound ecclesiological model, but also a model that provides a compelling solution to contemporary reductionism in the church. 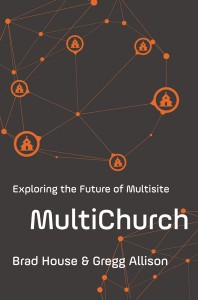 Multichurch—and the broader multisite movement for that matter—is nothing new. While it may seem like a recent phenomenon—something fresh, unique, and unprecedented—it’s actually the latest variation on a very old way of doing church. Every generation is prone to what C. S. Lewis referred to as “chronological snobbery,” the assumption that our time and our contributions are uniquely the best or the most advanced. The real story of multichurch, the idea of one church meeting as multiple congregations in a city, can be traced back to the first century, to the beginning of Christianity. It would be more accurate to say that contemporary manifestations are more of a renewal of early church methodology than a truly new development.

Multisite in the Early Church

The very first Christian church was a multisite church. The descent of the Holy Spirit on the morning of the day of Pentecost filled the 120 disciples and multitudes of onlookers with wonder (Acts 2:1–21). In response to Peter’s preaching of the gospel (2:22–40), the initial group of Jesus’s followers who had been baptized by the Spirit expanded, growing to about three thousand believers (2:41). This new, Spirit-generated church in Jerusalem was characterized by a number of elements. We read about them in Acts 2:42–45:

They devoted themselves to the apostles’ teaching and to fellowship, to the breaking of bread and to prayer. Everyone was filled with awe at the many wonders and signs performed by the apostles. All the believers were together and had everything in common. They sold property and possessions to give to anyone who had need.

The apostles preached the gospel and explained how repentance and faith unites people to Jesus Christ. Identification with the death, burial, and resurrection of Christ, vividly portrayed through baptism, brought about the forgiveness of sins and the gift of the Holy Spirit (2:38). The new brothers and sisters in Christ experienced a deep sense of unity, flourishing in community and engaging in sacrificial giving. These new believers worshiped God “in spirit and truth” (John 4:24 ESV). They were true worshipers through the crucifixion—the broken body and shed blood—of Christ, clearly illustrated in the celebration of the Lord’s Supper. These new disciples devoted themselves to prayer, praising and thanking God, rejoicing in their salvation, interceding for one another, and entreating God to rescue their family and friends through the gospel. And these new members witnessed God’s confirmation of the gospel message and its messengers, as the apostles healed the sick, restored sight to the blind, exorcised demons, and raised the dead.

Where and when did all this activity take place? In two locations: in the temple and from house to house. And it all happened, we are told, on a daily basis (Acts 2:46). The church in Jerusalem met day-to-day in a central location and in the disciples’ homes. In the large gathering place of the temple, the apostles preached and performed signs and wonders, and the believers enjoyed fellowship, gave sacrificially, worshiped, and prayed. Likewise, in the smaller gatherings in homes, the apostles taught and did miracles, and the disciples lived in community, helped other disciples and the poor, worshiped, and prayed. This dual-structured gathering occurred regularly: “Day after day, in the temple courts and from house to house, they never stopped teaching and proclaiming the good news that Jesus is the Messiah” (Acts 5:42). One such expression of the church of Jerusalem was the group that met in the house of Mary (Acts 12:12). The Bible tells us that the church of Jerusalem gathered together in the temple, and the church of Jerusalem gathered together in homes.

And what we find in Jerusalem was true in other cities as well. The church in Rome met in various locations, and Paul sent greetings to the church that specifically gathered in the house of Priscilla and Aquila (Rom. 16:5). The Roman church may have also consisted of Asyncritus, Phlegon, Hermes, Patrobas, Hermas, and other Christians meeting with them in a second house, as well as Philologus, Julia, Nereus and his sister, Olympas, and other Christians gathering with them in a third (Rom. 16:14–15). Similarly, the church of the Laodiceans assembled in various places, and Paul offered greetings to the specific congregation meeting in the house of Nympha (Col. 4:15).4 If we engage in a bit of informed speculation, we can imagine the Corinthian Christians gathering as “the whole church,” perhaps in the house of Gaius (Rom. 16:23; 1 Cor. 14:23), and as the church assembled in the house of Titius Justus (Acts 18:7), the home of Crispus (Acts 18:8), and the house of Stephanas (1 Cor. 16:15). Whether meeting all together as the whole church in a large house or space, or congregating as parts of the church in smaller homes, the assemblies were considered to be the church: one church existing as multiple congregations or locations.

The multichurch structure in some form or another continued to characterize churches after the apostolic age. The one-bishop framework, initiated in the second century, developed into the early church’s organization of a regional bishop leading all the churches in a geographical area. These provincial churches were part of one church under the bishop’s authority, even though they existed as separate, geographic congregations. More to the point, the early church self-identified as “one, holy, catholic, and apostolic” (Nicene-Constantinopolitan Creed). The church was defined, not as many separate churches, but as one church. Developing from this identification today is the Roman Catholic Church, which still considers itself to be the one universal church with all local/geographic churches (or parishes) under its authority.

to continue reading, buy your copy of MultiChurch on Amazon, Barnes & Noble, or Christian Book.