In today's excerpt from Grace Alone--Salvation as a Gift of God, Carl Trueman, professor of Historical Theology and Church History at Westminster Theological Seminary, gives us the background and context of Thomas Aquinas, the unexpected friend of grace alone. 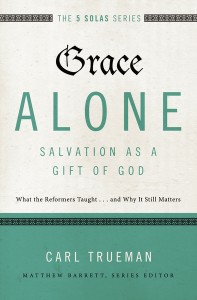 If the reception of Augustine’s theology of grace was subject to some confusion in the West, there were still some theologians whose teaching maintained his clear emphasis on God’s sovereignty and priority. Among these the most preeminent was Thomas Aquinas.

Most Protestants, if they have heard of Thomas Aquinas, probably regard him with some degree of suspicion. He is, after all, the great theologian of Roman Catholicism who provided the most elaborate and compelling arguments for many Roman Catholic distinctives such as transubstantiation. For many Protestants he is regarded more as part of the problem than as someone we can study and learn from. Yet we should remember the very simple point that Aquinas, as a thirteenth-century figure, pre-dates the Reformation and thus is, in a sense, the property of the whole church’s heritage. Aquinas’s thought has been profoundly and positively influential on Protestant thinking, as recent studies have demonstrated, particularly on the doctrine of God.

More pertinent for this study is that he also articulated an understanding of grace undergirded by a doctrine of predestination, which helped to preserve a stream of anti-Pelagian thought in the Middle Ages. It is true that many of his ideas were repudiated by Protestants and form points of profound disagreement between the Reformers and their Roman Catholic opponents—the nature of justification, the role of penance, and the meaning of the sacraments being only the most obvious—but this should not blind us to the fact that the conceptual framework of predestination within which he understood the existential aspects of salvation was essentially continuous with that of Augustine and therefore within the same stream of thinking as that of the Reformers. Aquinas’s teaching on grace is rich and wide-ranging, and given his status as the preeminent theologian of medieval Catholicism, it is not surprising that much of his theology of grace was focused on the sacraments.

Many Protestants will part company from him at this point, yet there is more to grace in Aquinas than baptism and the Mass. In fact, Aquinas can be immensely helpful to Protestants because his teaching on the framework of grace and some of the distinctions he draws concerning types of grace are still of use today. To begin, however, we need to know something of his context.

Aquinas was born in the thirteenth century, a key period for the intellectual development of Christianity. This era witnessed the founding of two great monastic orders, that of the Franciscans, or the Minor Brothers, and that of the Dominicans, or the Order of Preachers. Aquinas joined the latter. For most of his life he was committed to a life of preaching and pastoral work.

At the same time, universities were becoming more influential, offering hitherto unimaginable opportunities for intellectual excellence, the production of a comprehensive understanding of all of reality, and the synthesis of theology and other sciences. To add to the scholarly ferment, the metaphysical treatises of Aristotle were also being made available in Latin for the first time.

The history of the reception of Aristotle in the Latin-speaking West is crucial for understanding Aquinas and, indeed, for understanding the shape of late medieval thought. In the early sixth century, Christian layman Boethius had embarked on the ambitious project of translating all of Plato and Aristotle into Latin. Of those of Aristotle he had only managed to do the Organon, the collection of the philosopher’s logical treatises, by the time of his execution for treason in 524. This left the rest of Aristotle’s corpus still in Greek, and since this language was increasingly unknown in the West, the West remained cut off from works that might have fueled very different philosophical developments in its thought.

Aristotle’s works were, however, translated into Arabic, which explains why Islamic culture was more advanced than that of the Christian West by the twelfth century. At that point, Aristotle’s works started to make their way into Latin, often via Arabic translations, and the stage was set for major intellectual ferment.

This was the context for Aquinas’s great contribution. More than any other theologian of this time, Aquinas engaged with Aristotle, reflecting on the intersection of his thought with Christian teaching. There were significant differences between the two schools of thought. For example, Aristotle seemed to think that matter was eternal, and this differed from Christian teaching on the creation of the world. All of this demanded reflection by Aquinas and others on the relationship between faith and reason. Yet Aristotle also provided Aquinas with a set of concepts that were useful in unpacking and arranging the Bible’s teaching in many areas, not least the matter of grace. The stage was set for Aquinas to develop his understanding of grace against the background of Augustine’s insights and with the help of Aristotle’s understanding of the world...

to learn more about how Thomas Aquinas influenced the Reformation thinkers, purchase your copy today at Amazon, Barnes & Noble or Christian Book.

Trueman takes complex biblical and theological ideas and makes them easy to understand. The key message is that God’s grace, healing our sinful neediness, is at the heart of true biblical piety. Trueman develops this theme with relation to the Church, preaching, sacraments, and prayer. As a Catholic, I resonated deeply with Trueman’s portrait of biblical piety, and I found much else to treasure–including his emphasis on the priority of God’s action and his stirring account of the ministry of preaching. This is a book that will instruct everyone who loves the gracious Lord Jesus Christ.

Grace is a word so common in our day and age as to border on the cliché. Yet prizing the gospel means treasuring grace. Carl Trueman does us all the service, then, of helping to make connections that are crucial: between grace and the active presence of the triune God, between the promises of the Old Testament and the intervention recounted in the New, between the ancient faith of the early fathers and later Protestant reforms, and between a rich theology of grace and its necessary implications for piety and worship. This book brings remarkable biblical, historical, and pastoral perspective to an oftentimes ambiguous but genuinely amazing reality.