I hesitate to open this particular Pandora’s box, and my intent is not so much to deal with the issue of submission as much as it is to give a potential example of semantic range.

It always confused me when Paul switches from “wives submit (ὑποτασσόμενοι, from v 21)” to “wives respect (φοβῆται).” Are they meant to be the same thing, or is one an explanation of the other?

Yesterday in church I saw in the CSB a potential answer, or at least part of the answer. I am used to the translation “however” for πλήν. “However, let each one of you love his wife as himself, and let the wife see that she respects her husband” (ESV, also NIV, NRSV) [see the verses in parallel]. The NET uses “Nevertheless.”

However, the CSB has, “To sum up,” and the NLT has “So again I say.” Hoehner cites BDF #449, saying πλήν “is used to conclude a discussion and emphasize what is essential.” This would parallel BDAG 1c, “only, in any case, on the other hand, but, breaking off a discussion and emphasizing what is important.” In this case, it means v 33 is meant to break off from the details of the current discussion and summarize the entire passage.

ὑποτάσσω here is in the middle with a clear sense of subject affectedness. It is not the active sense of “subject” someone else, but a more reflexive sense, often described as voluntary submission.

φοβέομαι almost always means “to fear,” often of our attitude of reverential awe toward God. But the word also means “to have a profound measure of respect for, (have) reverence, respect” (BDAG). Hoehner says there is no philological evidence for the latter, but I suspect there is. Of course, it is not a mild form of respect; it would have to be a strong sense of respect such that fear would ensue if someone did not behave properly.

The other thought that crossed my mind was that if [my wife] Robin respects me, then it would naturally follow that she would be willing to voluntarily follow my lead. When I was pastoring, I saw the effects of women thinking that the essence of their relationship with their husband was submission. No matter what the husband did, no matter how evil their behavior, no matter how damning the consequences, they just acquiesced and “submitted.” I don’t believe that is what Paul intends (and I am a complementarian).

So if you have two overlapping circles, one for φοβέομαι and the other for ὑποτάσσω, I wonder if that middle area is what Paul intends. It is almost as if Paul uses ὑποτάσσω and then thinks it isn’t exactly what he means, so he uses φοβέομαι to more precisely define his meaning.

A respectful, voluntary following the husband’s lead. Regardless of what you believe, it does illustrate a semantic range and overlap. 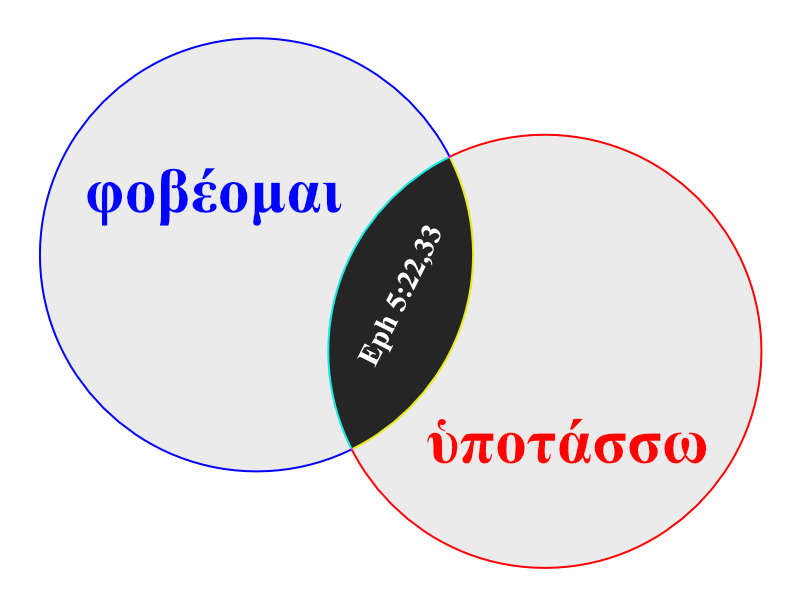 Bill Mounce
Bill is the founder and President of BiblicalTraining.org, serves on the Committee for Bible Translation (which is responsible for the NIV translation of the Bible), and has written the best-selling biblical Greek textbook, Basics of Biblical Greek, and many other Greek resources. He blogs regularly on Greek and issues of spiritual growth. Learn more about Bill's Greek resources at BillMounce.com.
Next Post
How to Read the Bible in Context
How to Read the Bible in Context ﻿﻿ The Bible is not just any book. It is God’s Word to us, given using a number of literary genres, through the stories...
Your form could not be submitted. Please check errors and resubmit.