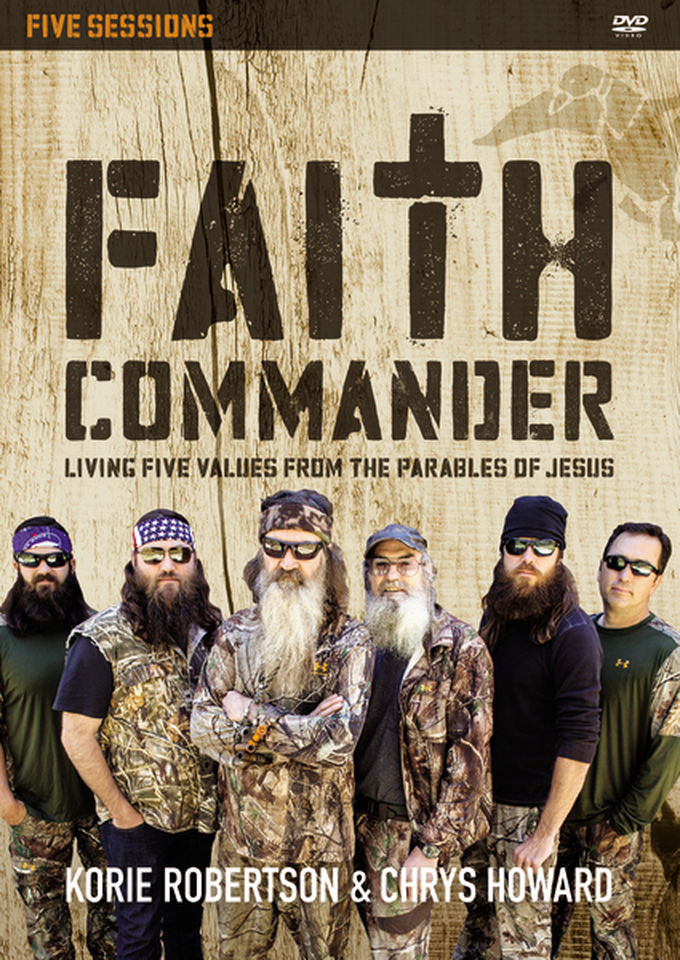 The Robertson Family Helps You Build a Faith-Shaped Life …

Join the Robertson men of the hit television show, Duck Dynasty®, as they tell stories and discuss some of the Bible’s most-loved parables. In this five-session video-based small group Bible study (book sold separately), you and your small group will learn about faith-based values and how to apply them to your life.

Designed to be used with the Faith Commander book (sold separately).

Korie Robertson is known for her role on A&E’s hit reality television series Duck Dynasty. The mother of six is known for her domestic and international philanthropic work and serves on the board of Help One Now, an organization dedicated to ending extreme poverty and caring for orphans worldwide.

Korie and her husband, Willie Robertson, CEO of Duck Commander®, are active advocates for adoption and foster care, having adopted two of their own children, and were honored for their work at the Congressional Coalition on Adoption Institute’s (CCAI) Angels in Adoption® gala in Washington, DC in 2013. They now serve on the CCAI board. Korie and Willie also founded the Drive Adoption fund in 2016, which was created to promote domestic and international adoption awareness and education.

Korie oversees several business ventures including the local Louisiana-based retail store Duck & Dressing. She also serves as a spokesperson and advocate for women on behalf of the natural skincare line made for women of all ages, Naturmetic.

Chrys Howard is the mother of Duck Dynasty's Korie Robertson. She holds a degree in elementary education and spent ten years teaching children with learning differences. After teaching, she joined the family-owned business, Howard Publishing, now known as Howard Books, where she served as senior editor and creative director. She has authored a number of books with more than 1,000,000 in print, including the best-selling Hugs for Daughters and Motivationals for Moms. She co-authored The New York Times bestseller Miss Kay's Duck Commander Cookbook, Strong and Kind with daughter, Korie Robertson, the children’s book, D is for Duck Calls with Kay Robertson, and Live Original Devotional with granddaughter, Sadie Robertson. Chrys has spent more than forty years working with Christian youth camps; speaking to women’s groups; teaching Bible classes to children, teens, and young adults; and traveling overseas for mission efforts. She is married to John Howard, and has three grown children and fourteen adorable grandchildren. She is blessed to live in West Monroe, Louisiana next door to Korie and Willie and surrounded by other family members