Is There a Meaning in This Text?

The Bible, the Reader, and the Morality of Literary Knowledge
Kevin J. Vanhoozer
Not Available Request an Exam Copy 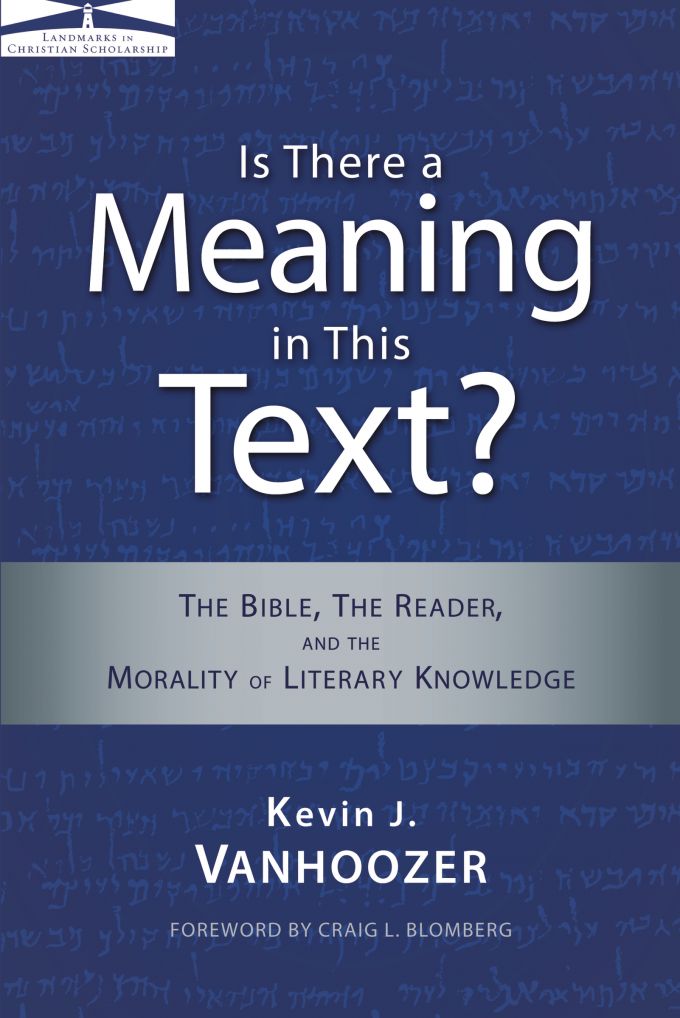 Is there a meaning in the Bible, or is meaning rather a matter of who is reading or of how one reads? Does Christian doctrine have anything to contribute to debates about interpretation, literary theory, and post modernity? These are questions of crucial importance for contemporary biblical studies and theology alike.

Kevin Vanhoozer contends that the postmodern crisis in hermeneutics—”incredulity towards meaning,” a deep–set skepticism concerning the possibility of correct interpretation—is fundamentally a crisis in theology provoked by an inadequate view of God and by the announcement of God’s “death.”

Part 1 examines the ways in which deconstruction and radical reader–response criticism “undo” the traditional concepts of author, text, and reading. Dr. Vanhoozer engages critically with the work of Derrida, Rorty, and Fish, among others, and demonstrates the detrimental influence of the postmodern “suspicion of hermeneutics” on biblical studies.

In Part 2, Dr. Vanhoozer defends the concept of the author and the possibility of literary knowledge by drawing on the resources of Christian doctrine and by viewing meaning in terms of communicative action. He argues that there is a meaning in the text, that it can be known with relative adequacy, and that readers have a responsibility to do so by cultivating “interpretive virtues.”

Successive chapters build on Trinitarian theology and speech act philosophy in order to treat the metaphysics, methodology, and morals of interpretation. From a Christian perspective, meaning and interpretation are ultimately grounded in God’s own communicative action in creation, in the canon, and preeminently in Christ. Prominent features in Part 2 include a new account of the author’s intention and of the literal sense, the reclaiming of the distinction between meaning and significance in terms of Word and Spirit, and the image of the reader as a disciple–martyr, whose vocation is to witness to something other than oneself.

Is There a Meaning in This Text? guides the student toward greater confidence in the authority, clarity, and relevance of Scripture, and a well–reasoned expectation to understand accurately the message of the Bible. Is There a Meaning in This Text? is a comprehensive and creative analysis of current debates over biblical hermeneutics that draws on interdisciplinary resources, all coordinated by Christian theology. It makes a significant contribution to biblical interpretation that will be of interest to readers in a number of fields. The intention of the book is to revitalize and enlarge the concept of author–oriented interpretation and to restore confidence that readers of the Bible can reach understanding. The result is a major challenge to the central assumptions of postmodern biblical scholarship and a constructive alternative proposal—an Augustinian hermeneutic—that reinvigorates the notion of biblical authority and finds a new exegetical practice that recognizes the importance of both the reader’s situation and the literal sense.

Kevin J. Vanhoozer (PhD, Cambridge University, England) is Research Professor of Systematic Theology at Trinity Evangelical Divinity School in Deerfield, Illinois. He is author of several books, including Is There a Meaning in This Text? The Bible, the Reader, and the Morality of Literary Knowledge, The Drama of Doctrine: A Canonical-Linguistic Approach to Christian Theology, and Faith Speaking Understanding: Performing the Drama of Doctrine. He also serves on the editorial board of the International Journal of Systematic Theology and the Journal of Theological Interpretation.

“What starts off as contemporary hermeneutics to justify the move from biblical text to systematic theology becomes full-blown, highly sophisticated, theological hermeneutics in Is There a Meaning in This Text?. The decade this book has been in print has not diminished my enthusiasm for it. Vanhoozer is one of the few contemporary scholars who takes a balanced measure of postmodern thought within an unflinching Christian confessionalism. Here is neither mere traditionalism nor ephemeral faddishness. If in certain respects the discussion has moved on since Vanhoozer authored this book, that is merely a way of saying that his contribution toward pointing the way forward---the Christian way forward---out of several interpretive morasses has been seminal.” -- D. A. Carson

“Over the past fifty years, evangelical theology has been beset by three major questions. Is the Bible the totally truthful Word of God and what does it mean to confess that it is? Is the God of the Bible the almighty, all-knowing Lord of time and eternity? How do we proclaim Jesus Christ as the unique and universal Savior in a world of vacuous meaning and privatized belief? Each of these issues begs the question that is the title of this book: Is There a Meaning in this Text? Kevin Vanhoozer’s landmark study is must reading for anyone interested in the difficult but necessary work of biblical interpretation. I welcome this anniversary edition with enthusiasm.” -- Timothy George

“Vanhoozer challenges a ‘hermeneutics of suspicion’ and advocates a ‘hermeneutics of humility and confidence.’ His project succeeds because he does not simply dismiss those literary critics, theologians, and philosophers whose work undermines our confidence in biblical interpretation, but he learns from them as he offers a more powerful model for understanding the communicative act between author and reader in the biblical text. As a biblical scholar and commentator, I have found in Vanhoozer’s work a theological foundation to my interpretation. Everyone interested in biblical interpretation should read and ponder this profound book.” -- Tremper Longman III

“There is meaning in Vanhoozer's text! Plenty of it, in fact. It is a meaning that traces with a discerning eye the history of authorship and authority, of readership and interpretation---right up to the present time and all under the umbrella of both thinking Christianly and living Christianly. Here is historical, philosophical, and theological exegesis---capped with creative construction---of the first order. As was said to Saint Augustine, on whose thought Vanhoozer builds, Tolle, lege. Take up! Read!” -- Robert H. Gundry

“Kevin Vanhoozer’s Is There Meaning in this Text? is more biblical than any hermeneutics book I’ve seen because it cares so much about how language works. After teaching the Bible for twenty-five years, I’ve become convinced that we don’t given enough attention to how language works, how one person (in this case God) can communicate intent to another person (in this case the church). We abort the process of interpretation when we stop at an imperative and think we’ve got ourselves a commandment or a prohibition. Vanhoozer probes behind mood and voice to plumb evangelical depths for understanding divine intent in written form. Evangelical students who are nurtured on this book will change the church.” -- Scot McKnight

“An exhaustive and well-researched account of modern hermeneutics that serves to introduce the subject in a comprehensive way and also to propose a constructive approach for our season. Now a standard in the field and properly so.” -- Christopher R. Seitz

“Is There a Meaning in This Text? is a daring attempt to think theologically about hermeneutics, treating biblical interpretation as a helpful paradigm for all acts of reading. Vanhoozer's thought has deepened and developed over the years, yet this remains an important book. It offers profound insight into much that is at stake in debates about 'postmodernism' and the ethics of interpretation. Moreover, Is There a Meaning in This Text? remains a crucial element in the intellectual trajectory of the leading evangelical voice recovering theological interpretation of Scripture.” -- Daniel J. Treier

“Is There a Meaning in this Text? was widely recognized as a major contribution to biblical hermeneutics when it was published in 1998, and it is excellent news that it is to be given a new lease of publishing life and made available to a fresh generation of Bible students and expositors.” -- Howard Marshall

This book provides an excellent reply to those who might underestimate the threat of postmodernism, especially in hermeneutics. It still repays study as a classic landmark in its field. The author provides a convincing critique of much that is destructive for readers of the Bible in Derrida and others. Vanhoozer also addresses the sad decline of epistemology, alongside a good critique of Richard Rorty’s neo-pragmatic philosophy. He usefully discusses the respective merits and weaknesses of hermeneutics oriented towards the author, the text, and readers, respectively. He includes critiques of deconstruction and reader-response theories, as well as a positive account of speech-act theories and theological hermeneutics. -- Anthony C. Thiselton

“Seldom does one come across a book that combines, as this one does, breadth of learning, depth of analysis, and clarity of expression. Defenders of authorial intention typically caricature thinkers who argue in favor of the indeterminacy of meaning. Not so for Vanhoozer. It is clear that he not only understands opposing arguments, but appreciates their value and has learned from them. This alone makes his own thesis very persuasive. Even those who disagree with him will recognize that this impressive and literate volume is to date the most capable defense of the author. And beyond that, readers will find the book a thorough education in several areas of modern thought.” -- Moisés Silva