What Unites and Divides Catholics and Protestants After 500 Years
Gregg Allison (Author), Christopher A. Castaldo (Author)
Not Available Request an Exam Copy 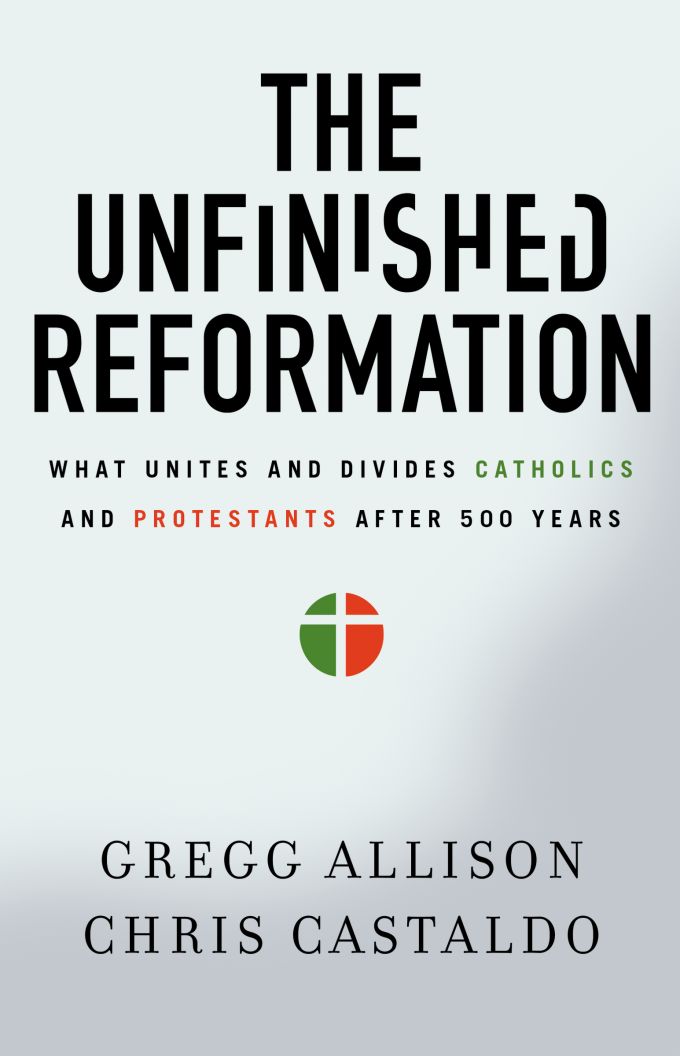 The Unfinished Reformation offers a thoughtful look at the key theological and sociological differences between Catholicism and Protestantism.

In 1517 a Catholic monk nailed a list of grievances on the door of a church in Germany and launched a revolution in the history of Christianity. That monk was Martin Luther, and the revolution was the Protestant Reformation. What followed this upheaval was flexibility and innovation in the church but also religious instability and division, particularly among the Catholic and Protestant fault line. Five hundred years later, there continues to be unresolved issues between the Protestant and Catholic churches. So, Gregg Allison and Chris Castaldo ask... is the Reformation really finished?

The Unfinished Reformation is a brief and clear guide to the key points of unity and divergence between the two largest branches of Christianity. Fundamental differences in doctrine and practice are addressed in detail:

Written in an accessible and informative style, The Unfinished Reformation provokes thought about Christian beliefs, equips you for healthy conversations with those on "the other side of the divide", and encourages fruitful discussion about the gospel of Jesus Christ.

Gregg Allison (PhD) is Professor of Christian Theology at The Southern Baptist Theological Seminary in Louisville, Kentucky where he teaches systematic theology. Previously he served on Cru staff at the University of Notre Dame and overseas in Italy and the Italian-speaking region of Switzerland. He is a pastor of Sojourn Community Church, and is the theological strategist for Sojourn Network, a church planting network of about thirty churches. He is the author of Historical Theology: An Introduction to Christian Doctrine; Sojourners and Strangers: The Doctrine of the Church; and Roman Catholic Theology and Practice: An Evangelical Assessment.

Chris Castaldo (PhD) was raised on Long Island, New York, as a Roman Catholic and worked full-time in the Catholic Church for several years. After eight years as pastor of outreach and church planting at College Church (Wheaton, Ill.), followed by three years as Director of the Ministry of Gospel Renewal at Wheaton College, Chris currently serves as Lead Pastor of New Covenant Church in Naperville, IL. He is the author of Holy Ground: Walking with Jesus as a Former Catholic and Talking with Catholics about the Gospel: A Guide for Evangelicals. Chris blogs at www.chriscastaldo.com

Many Christians are aware that there a fundamental differences between Protestants and Roman Catholics but are unsure exactly what these differences are or how much they really matter. Some may regard them as trivial while others may struggle to see how there can be Christians in both groups. The Unfinished Reformation sets out clearly and simply where the differences lie. The differences are not minimised, but nor are they magnified. Where Protestants have often misrepresented Roman Catholics this is pointed out. At the same time there is no pretence that no differences exist. This book is to be warmly commended to those wishing to understand these issues better. -- Tony Lane, Professor of Historical Theology, London School of Theology

What Gregg Allison and Chris Castaldo have done in this important book is unique: they carefully explore the many areas where Protestants and Catholics agree but also disagree. I've seen exhortations to unity, and I've seen polemics for division, but I've never seen one volume deal so well with both commonality and also disagreement. Knowing their personal ministry, though, I'm not surprised that Allison and Castaldo exhibit such grace alongside truth. -- Collin Hansen, editorial director, The Gospel Coalition

Allison and Castaldo have provided a book that is both timely and thoughtful---a book that at the same time looks fondly on the Reformation yet asks the important question of these reforms for today. Their approach is especially sensitive to the realities of divided families, one Catholic and one Protestant, yet aware of how Catholics and Protestants find themselves united on struggles to end abortion. This is a book that will educate the novice and provoke thought in the expert. -- Ryan M. Reeves, Associate Professor of Historical Theology and Dean of Jacksonville Campus of Gordon-Conwell

The Unfinished Reformation is an accessible, well-written explanation of Catholic beliefs, Protestant beliefs, and how the two relate. The layperson can read this book and feel equipped to have well-rounded conversations about faith with his Catholic or Protestant neighbor about matters of faith. -- Ed Stetzer, Billy Graham Distinguished Chair, Wheaton College

This book is a model of gracious and principled dialog, as much for its tone as its content. Heartily recommended for all who care about theology and the particular conversation between evangelical Protestants and Roman Catholics. -- Gerald Hiestand, Executive Director, The Center for Pastor Theologians

This is the best treatment I have read on understanding what continues to unite and divide Catholics and Protestants. While considering the historic roots of the Reformation in the sixteenth century, Gregg Allison and Chris Castaldo also remain sensitive to the significant doctrinal shifts of the twentieth century and our contemporary context. They are informed but not pedantic, accessible but not simplistic. Both scholar and layperson will benefit. I heartily recommend this book to Catholics and Protestants alike who desire an honest and thoughtful way to approach the other side of the 'divided family.' -- Rev. Dr. Camden M. Bucey, President, Reformed Forum; Pastor, Hope Orthodox Presbyterian Church, Grayslake, Illinois

This book blows a welcome breeze into the stifling and oppressive debates between Protestants and Catholics. Too often, each side labels the other a ‘false church’ and refuses to see the good the other tradition offers. Allison and Castaldo refuse to be this simplistic---not to mention uncharitable---in their approach. Congenial in their tolerance while never obscuring real differences, the authors lay out the main points of disagreement between these two Christian traditions. If you are a Protestant with a Catholic in your life, or vice versa, you need this book in your library. -- Bryan M. Litfin, Professor of Theology, Moody Bible Institute