7 Myths about the Bible & Homosexuality Debunked

When I first started reading David Lamb’s new book about Old Testament-style love I thought to myself, “Yeah, but what does he say about homosexuality?”

Given the current tectonic sexual shifts within Western culture, I imagine others will be searching for the same kind of biblically-rooted, pastorally-sensitive answers I was interested in. In this final chapter, Lamb doesn’t disappoint; he surprises!

In a sensible, down-to-earth, well-informed examination, Prostitutes and Polygamists exposes and debunks seven important myths about the Bible and homosexuality.

While homosexuality itself never appears in the Old Testament, two verses in Leviticus do briefly address the issue: Leviticus 18:22 and 20:13.

“Leviticus clearly teaches that homosexual practice is wrong,” Lamb concludes. “In both verses the act of a man having sex with another man is condemned, and the second law mandates the death penalty.” (163)

He argues the “severity of this punishment suggests that it’s a serious sin.” (163)

There is nothing in the context of these Leviticus laws to suggest they were temporary laws meant to apply only to Israel or that it would have been fine in the context of a committed homosexual relationship. (163)

The laws of Leviticus 18 and 20 are generally focused regarding sexual activity and idolatry.

Though some insist homosexuality is a major biblical issue, Lamb reveals otherwise.

4) God Cares More About Gay Sex Than Other Issues

Lamb deepens our understanding of the Bible's concern for homosexual practice by contrasting the twice-mentioned prohibitions of gay sex with the Old Testament's other preoccupations:

Lamb argues these numbers communicate a lot about who the Bible wants to talk about: “The Old Testament is more interested in the poor, widows, and prostitutes (and even goat-boilers) than homosexuals.” (165)

In an extended section encompassing most of the chapter, Lamb sheds important biblical light on the most well-known city allegedly connected to homosexuality: Sodom. He debunks two popular perceptions of the city, the first being that the residents committed homosexual acts.

He insists the text isn’t entirely clear what their sin was. While the mob in Genesis 19 intended to gang rape the two angelic visitors, it doesn’t actually say they performed the deed for which they’ve been forever known.

“The text of Genesis 19 does, however, record two sins that were committed by Sodom: inhospitality and injustice.” (177) The prophet Isaiah later linked Sodom to injustice, and Ezekiel condemns them for their inhospitality and pride.

He concludes the Bible supports the idea in Genesis 19 that Sodom was guilty of inhospitality and injustice, not gay sex.

6) Sodom's Destruction for Homosexuality Proves It's the Worst Sin

Lamb also debunks the myth that Sodom was destroyed because of homosexuality. The texts above show it wasn’t. Yet its remarkable destruction has led many Christians to assume homosexual behavior is the worst sin. Lamb highlights what’s remarkable instead:

what is shocking is how the text emphasizes not the divine destruction but the divine compassion. (167)

Stretching back to Genesis 13:13 we learn Sodom's citizens “were wicked, great sinners against Yahweh.” Yet a chapter later God actually rescues them. Then Abraham cares about the wicked Sodomites. Finally, God warns the city before he destroys it.

While Jesus avoids the topic of homosexuality, he doesn’t ignore Sodom. Yet “he never says God hates Sodomites, and he never associates the city with sexual immorality.” (180) Instead Jesus connects it to inhospitality, using their example to warn Galilean cities—to get his neighbors attention.

For us today, rough equivalents to Jesus’ audience [would be] people from our own country, our own denomination, even our own church. (181)

Lamb concludes, “Perhaps followers of Jesus should follow Jesus’ example and save our strongest rhetoric not for strangers or people outside the church but for those closest to us.” (181)

Undoubtedly, homosexuality is an important issue for our culture and the church. Engaging Lamb’s book will put it and other sexual issues in their proper biblical context.

Prostitutes and Polygamists is a lens through which you and those you teach will discover and encounter the God who behaves graciously when humans behave badly.

Jeremy Bouma
Jeremy Bouma (Th.M.) has pastored on Capitol Hill and with the Evangelical Covenant Church in Michigan. He founded THEOKLESIA, which connects the 21st century Church to the vintage Christian faith; holds a Master of Theology in historical theology; and makes the vintage faith relevant at jeremybouma.com.
Next Post
Paul's "Cutting" Remarks – Spotlight on WBC: Galatians, $9.99 for a Limited Time 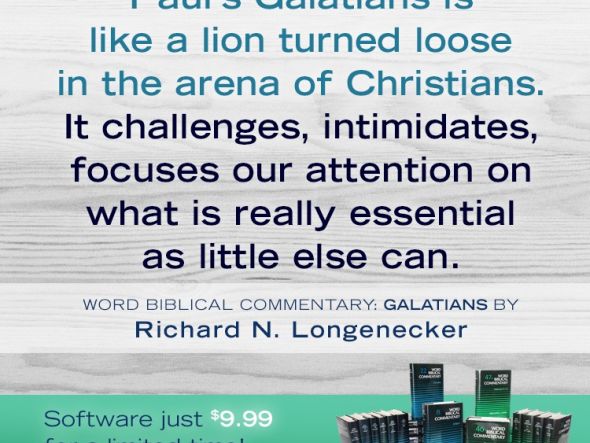 Paul's "Cutting" Remarks – Spotlight on WBC: Galatians, $9.99 for a Limited Time Did you know that for a short time, all Word Biblical Commentary volumes are on sale at Logos, Accordance, Olive Tree, a...
Your form could not be submitted. Please check errors and resubmit.