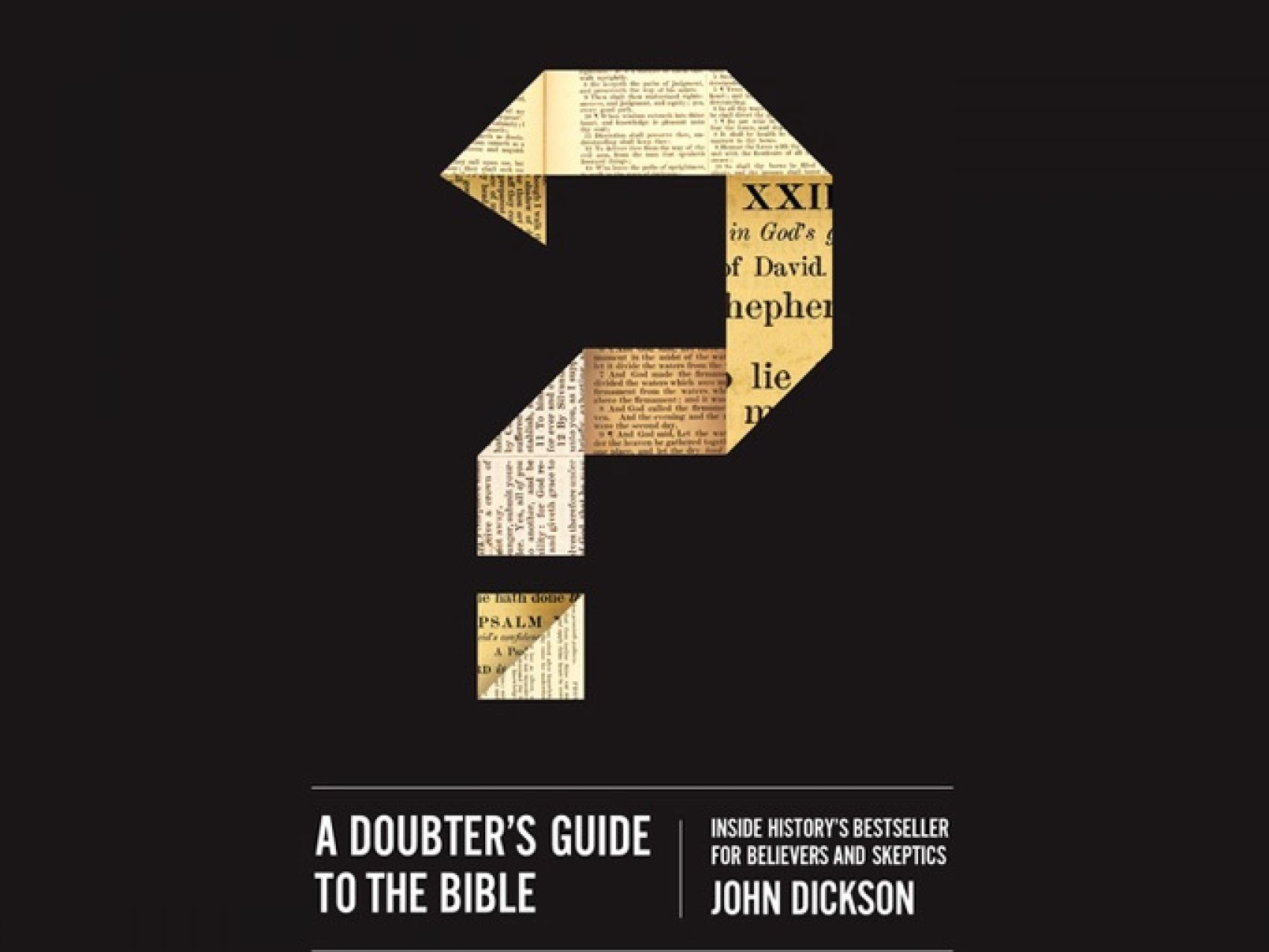 One year ago today I had surgery to remove a malignant tumor that had stolen itself into my thyroid. Thankfully, I had the good kind of cancer, and I’m (still) free and clear. Yet the dreaded “c” word will always be part of my story, both as patient and survivor.

I can’t wait for the day when cancer is no longer part of our world! Same for drive-by shootings, divorce, and snow (OK, snow will probably be part of the new creation, but this Michigander can hope, can’t he?)

It’s fitting, then, I write this column today, because in it we are exploring the ending of John Dickson’s excellent, ambitious new book, A Doubter’s Guide to the Bible. His ending happens to be the Bible’s ending, for he outlines how everything will be good again through God’s re-creative movement.

What I appreciate about this chapter is how he carefully, intelligently answers the question many skeptics (and even believers) are secretly asking:

How will the pain of our existence be solved?

As is the case with the rest of the book, Dickson deftly explains to curious doubters what it might mean if the Bible turned out to be true. He argues if it is, people like me have a lot to celebrate!

The New Creation and Genesis Again

The Christian Story is a story “between the trees;” it moves from one tree in one garden (Gen 2) to another tree in another garden (Rev 22). The final chapters of Revelation find obvious echoes in Genesis, which Dickson suggests is intentional: “God intends to recover Eden for all. From ‘creation’ to ‘new creation’—this is the story line of the Bible.” (205)

Dickson draws attention, here, to Jesus' “renewal of all things” language in Matt 19:28. He reveals the Greek word is palingenesia, which combines the words for “again” and “production/genesis”—Genesis again.

That’s the plot from Genesis to Revelation: God taking a post-Eden world back again. As Dickson explains, “God will renew and redeem not just souls but the whole creation.” (205) More importantly, “The Bible’s redemptive plan is not just about putting souls into heaven. God wants to redeem all things, whether things on earth or things in heaven...” (203)

The doctrine of new creation, then, has great bearing on two important aspects of human existence: dying and living.

The New Creation and Dying

First, the doctrine of new creation impacts dying, because Christians insist “Death…is not the end;” we “believe in resurrection, Christ’s and ours, and that of the whole creation.” (210) This contrasts sharply with the contemporary picture of the afterlife, which Dickson says is a strange mixture of Greek philosophy, eastern religion, and Hollywood.

The Greek tradition, as promoted by Plato, “downplayed the importance of the body, of physicality, both in the present and the afterlife.” (207) Bodily existence didn’t matter. What mattered was a sort of mental reality, of which the physical world was a pale imitation and toward which the universe was heading.

Eastern religions teach something very similar. Moksha, Hindu salvation, “is the liberation of the soul from bodily existence, so that the worthy one might merge with the spirit behind the universe, Brahman, like a spark returning to its flame…” Likewise, “Buddha described the ultimate goal as the cessation of all mater and sensation.” (208)

The biblical vision is far different: “[It] is not liberation from creation, but the liberation of creation.” (208) Resurrection is in store for every ounce of the created order. This means “Eternal life is not disembodied life; it is bodily life guaranteed by Christ’s own resurrection.” (209) Belief in “the resurrection of the dead and the life in the (new) world to come” is a central Christian belief—which gives hope for every existential pain, especially cancer.

The New Creation and Living

Yet the doctrine of new creation isn’t simply about dying, it’s also about living: “When the Bible speaks about the future kingdom, "it often talks about what it means for us to live in light of what is to come.” (211-212)

Dickson argues that current ethics and the coming kingdom have nothing to do with earning a spot on the train bound for life after death; it’s about living before death the kind of life that will prevail for eternity:

The future kingdom will be one of righteousness, love, peace, and grace, so Christians try to live righteous, loving, peaceful, gracious lives while they wait for the kingdom to be realized. Christians believe that a new dawn is breaking and so they try to live like the glorious new day is already here. (213)

The hope of new creation is as much about the present as it is the future. It’s the reason why Christians work right now toward restoring the three dimensions God himself will eventually redeem, which encompasses our existential pain: spiritual, social, and environmental.

In the end, Dickson wonders if this is all just too good to be true. He recognizes some have said as much: Feuerbach and Freud argued religion, Christianity in particular, was simply wish-fulfillment. In a brilliant move of rhetorical jujutsu, Dickson argues it most certainly is:

Perhaps this “match” between human longings and the Bible’s message arises because the one who made us for himself stands behind the Bible, as water for our thirst. (216)

I can’t wait for the day when Jesus takes away my synthetic thyroid medication and hands me a new thyroid, and banishes every other existential pain. Call it wishful thinking, but I agree with Dickson:

In Jesus Christ all of our longings for God, for each other, and for the redemption of creation are satisfied. He is water for my thirst. (217)

Dickson’s book offers doubters in your life and in your church this invitation to drink.

Jeremy Bouma
Jeremy Bouma (Th.M.) has pastored on Capitol Hill and with the Evangelical Covenant Church in Michigan. He founded THEOKLESIA, which connects the 21st century Church to the vintage Christian faith; holds a Master of Theology in historical theology; and makes the vintage faith relevant at jeremybouma.com.
Next Post
The Internal Witness [Awakening Faith]
The Internal Witness [Awakening Faith] But now that you have been set free from sin and have become slaves of God, the benefit you reap leads to holiness, and ...
Your form could not be submitted. Please check errors and resubmit.