Because Christ Was Born, We Can “Put on Christ” and Become “Firstborn Sons”

’Tis the season to reflect upon the majesty and mystery of the incarnation of Christ. But why not also reflect upon another aspect of his person and work: the imputation of his righteousness to sinners?

Although the Lenten season is still a few months away, Christmas still affords us the opportunity to consider his gift of righteousness through his death on the cross—given that Christ’s birth is an obvious prelude to his vicarious substitution, which paved the way for our justification and the “great exchange.”

Michael Horton opens his new two-volume theological project, Justification (Volume 1 and Volume 2) with this motif from the ancient church—a work in which he helps readers encounter the remarkable biblical texts on justification and places them in conversation with provocative proposals that have reignited contemporary debates around justification. He carries this great-exchange language forward to his second volume, where he draws our attention to the images the New Testament uses to speak of the gift we’ve received:

The New Testament offers a broad range of images, such as clothing, transferring debts and assets, a last will and testament, a gift of righteousness, and other metaphors for imputation. . . . Great-exchange language carries the same freight as the technical term imputation: “the righteous one, my servant, shall make many to be accounted righteous” (Isa 53:11); “the righteous for the unrighteous” (1 Pet 3:18)

Below is an excerpt from an exhaustive chapter on the mechanism of justification, imputation, that spells out two of these images—offering us an opportunity to consider this gift on this day celebrating the birth of Immanuel who “become for us wisdom from God—that is, our righteousness, holiness and redemption” (1 Cor 1:30).

To “put on Christ” is to derive all of one’s righteousness from him, both for justification and sanctification. That is not only because he is the eternal Son but because he is the justified covenant head of his people “and was declared to be Son of God with power according to the Spirit of holiness by resurrection from the dead” (Rom 1:4). In Christ, our rags are exchanged for robes of regal splendor and we are seated at the same table with Abraham, Isaac, and Jacob.

The clothing analogy is not original to Pauline theology. It occurs first with God’s clothing of Adam and Eve after the fall. At first, Job considered his integrity his clothing: “I put on righteousness, and it clothed me; my justice was like a robe and a turban” (Job 29:14), but he also recognizes, “Though I am in the right, my own mouth would condemn me; though I am blameless, he would prove me perverse” (Job 9:20). “I shall be condemned [lit., “am accounted wicked”]; why then do I labor in vain?” (v. 29). He realizes that God’s justice penetrates into the depths of his heart. Who can win a case in court with God? (vv. 31–32). “There is no arbiter between us, who might lay his hand on us both. Let him take his rod away from me, and let not dread of him terrify me. Then I would speak without fear of him, for I am not so in myself” (vv. 33–35). Only at the end of the story does Job realize that his only hope is to have a mediator and to cast himself on God’s mercy in sackcloth and ashes. “Even now, behold my witness is in heaven, and he who testifies for me is on high” (16:19). For I know that my Redeemer lives, and at the last he will stand upon the earth” (19:25).

The analogy reappears in the vision of Joshua the high priest in Zechariah 3, a courtroom scene with Yahweh the judge, the Angel of the Lord (who is also identified as God), Satan as the prosecutor, and of course Joshua himself. Satan accuses, and the Angel of the Lord commands his attendant to remove the high priest’s filthy clothes (remission) and to exchange these for garments of righteousness (justification).

Similarly, Isaiah exults, “I will greatly rejoice in the Lord, my whole being shall exult in my God; for he has clothed me with the garments of salvation, he has covered me with the robe of righteousness, as a bride-groom decks himself with a garland, and as a bride adorns herself with her jewels” (Isa 61:10–11; cf. Rev 21:2, which paraphrases this verse, interpreting it as the clothing of the elect in robes of righteousness).

The guests at the wedding feast in Jesus’s parable are adorned in festive garments (Matt 22:1–14), and the prodigal son is decked out by the father in the best clothes upon his return (Luke 15:11–32). So when Paul says that Christ is “our righteousness, holiness, and redemption” (1 Cor 1:30) and refers repeatedly to our being “clothed with Christ,” “having put on Jesus Christ,” and calls us on that basis to “put on Christ” in our daily conduct, this same connection between justification and sanctification is being drawn.

Therefore, when N. T. Wright says, “But Paul does not say that God sees us clothed with the earned merits of Christ,” [118] I wonder what else he could possibly mean when he speaks of “the gift of righteousness” that is nothing less than “Jesus Christ” (Rom 5:17) or when he says that “all of you who were baptized into Christ have clothed yourselves with Christ” (Gal 3:27). Again, there is more to this great exchange than imputation, but there is nothing without the latter. We wear Christ’s righteousness like a robe. And what is this righteousness if not his “earned merits”—that is, his fulfillment of the law? Justification is no more a legal fiction than it is an emperor with no clothes.

We could refer to other gifts of our union with Christ that depend on justification. In adoption, the Father’s reward given to Christ for his meritorious obedience is shared with his brothers and sisters. Everyone who is in Christ is a “firstborn son,” coheir of the entire estate, a child of Abraham (Gal 3:28–29). Far from the false dichotomies that we have encountered, the judicial basis of justification provides the objective security for a genuine relationship.

In the economy of the Sinai covenant, Moses is a servant in God’s house, while Jesus Christ is the firstborn son (Heb 3:1–6). So even Moses’s justification and adoption are dependent not on the condition of his personal fulfillment of the law-covenant made at Sinai but on Christ’s personal fulfillment of that covenant by which he has won our reward.

For he who sanctifies and those who are sanctified all have one source. That is why he is not ashamed to call them brothers, saying, “I will tell of your name to my brothers; in the midst of the congregation I will sing your praise.” And again, “I will put my trust in him.” And again, “Behold, I and the children God has given me.” (Heb 2:11–12)

Like justification, this adoption is not a legal fiction. The law is fulfilled: the first-born Son has won the entire estate by his victorious service to the crown, but, as established in the mutuality of the covenant of redemption (i.e., election), every adopted child has an equal share.

If union with Christ in the covenant of grace is the matrix for Paul’s ordo, justification remains its source, even for adoption. We do not move from the topic of justification to other (more interesting) ones but are always relating the riches of our inheritance to this decisive gift. In William Ames’s words, “Adoption of its own nature requires and pre- supposes the reconciliation found in justification. . . . The first fruit of adoption is that Christian liberty by which all believers are freed from the bondage of the law, sin, and the world.” [119] The children need not worry about their future or jockey for their Father’s favor. After all, “He who did not withhold his own Son, but gave him up for all of us, will he not with him also give us everything else?” (Rom 8:32).

“It is not surprising,” writes Horton, “that the ancient church found justification like a gleaming gem nestled in martial, clothing, commercial, legal, familial, and a host of other analogies. These are, after all, the ways justification appears in Scripture itself” (363).

Christmas is the perfect time to reflect upon this "gleaming gem" and the broad range of images the New Testament uses to speak of the righteousness of Christ that has been imputed to us sinners. Horton's two-volume work will not only help you make sense of this imputation. It will also help you understand the grandeur of the doctrine of justification—theologically and biblically. As Craig Keener explains in his endorsement:

Engage volume 1 and volume 2 of Horton’s project to trace the doctrine of justification from the patristic era to the Reformation, and to discover a map for constructive discussions of justification today.

What Does Justification Mean? 7 Things You Need to Know

Jeremy Bouma
Jeremy Bouma (Th.M.) has pastored on Capitol Hill and with the Evangelical Covenant Church in Michigan. He founded THEOKLESIA, which connects the 21st century Church to the vintage Christian faith; holds a Master of Theology in historical theology; and makes the vintage faith relevant at jeremybouma.com.
Next Post
For to Us a Child Is Born: The Meaning of Isaiah 9:6 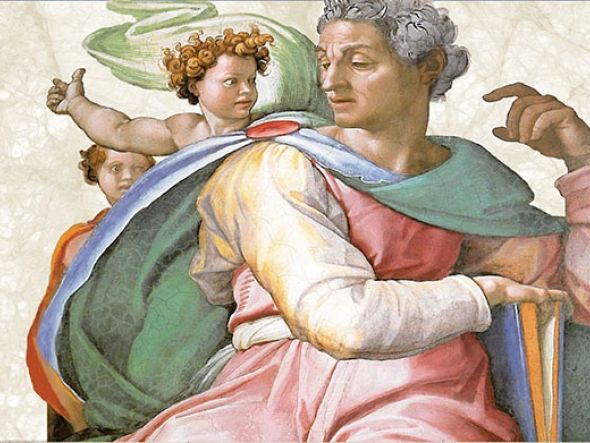 For to Us a Child Is Born: The Meaning of Isaiah 9:6 Isaiah 9:6 is a prophecy about a future child who would bear the government on his shoulders and be called by titles tha...
Your form could not be submitted. Please check errors and resubmit.