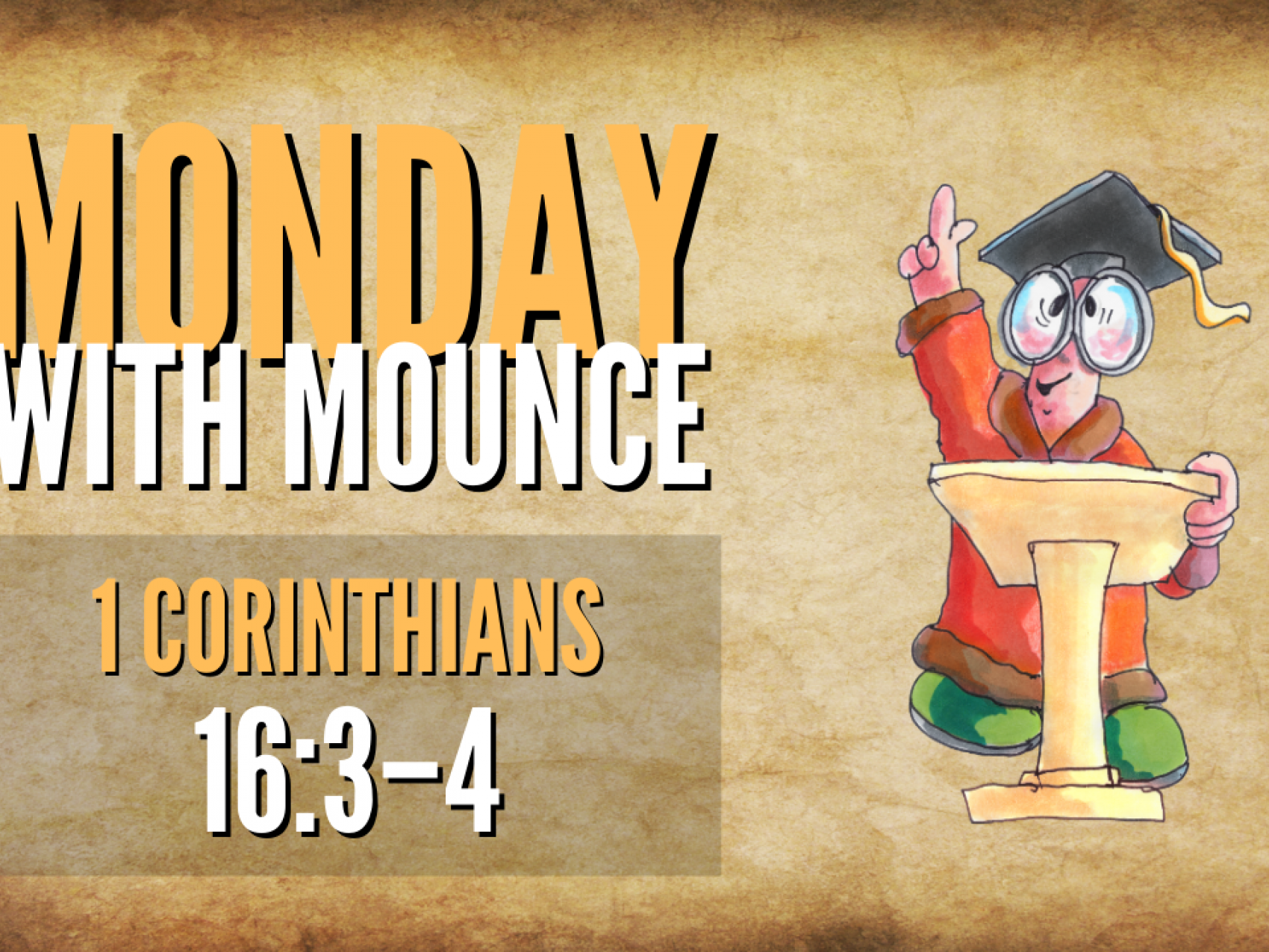 Paul is ending his letter to the Corinthian church and concludes with a general admonition. V 13 illustrates the issue of aspect, and v 14 shows a troubling omission in some translations.

Paul writes, “Be on your guard (γρηγορεῖτε), stand firm in the faith (στήκετε ἐν τῇ πίστει), be courageous (ἀνδρίζεσθε), and be strong (κραταιοῦσθε).” Notice that they’re all present imperatives with continuous (imperfective) force. All of them are admonitions to continual actions, as you would suspect from the meaning of the verbs themselves. In all the attention being paid these days to aspect, we can’t forget that aspect is just one part of the language’s ability to convey information. Paul could have used aorist imperatives and had the same basic meaning, but the present tense adds a slight nuance to the words’ meanings’, emphasizing that being on your guard, standing firm, being courageous, and being strong, is something that we do day in and day out.

But there’re other oddities in this passage. Morphologically, στήκετε is a perfect from ἵστημι, but in the Koine it functions as a present. The other question is whether πίστει refers to personal faith (“in your faith”) or to the gospel (“the faith,” “in what you believe”).

ἀνδρίζεσθε is particularly difficult to translate in today’s climate and the changing English language. The word clearly has to do with being a “man” (ἀνήρ), but in what sense? Historically, it has been seen in contrast to being a “woman,” and hence the translation “act like men” (NASB), drawing connections with the similar idea throughout the Old Testament where warriors are urged to be courageous (1 Sam 4:9; 2 Sam 10:12). Other translations, while certainly understanding the word’s etymological meaning, translate it as “be courageous” (CSB, NRSV, NIV, NLT, cf. NET). The NJB actually combines the last two exhortations, “be brave and strong.”

Thiselton adds, “But here the gender issue threatens to obscure the force of be a man! ἀνήρ has two semantic oppositions, not one: it does not simply pose a contrast with supposedly ‘feminine’ qualities; it also stands in contrast with childish ways, as strikingly in 1 Cor 13:11: ἐφρόνουν ὡς νήπιος (I had a childish mind-set, attitude) but I set all this aside ὅτε γέγονα ἀνήρ (when I became a man). Hence,” Thiselton argues, ” the Greek suggests both maturity and courage,” and he suggests the translation, “show mature courage” (The First Epistle to the Corinthians, in The New International Greek Testament Commentary).

But what caught my eye this morning was v 14. The NIV and CSB translate, “Do everything in love (πάντα ὑμῶν ἐν ἀγάπῃ γινέσθω).” Where is the translation of ὑμῶν? Other translations, however, work to get ὑμῶν into the wording. “All that you do must be done in love” (NASB, cf. ESV, NRSV). “Everything you do should be done in love” (NET). I think my favorite is the NAB, “Your every act should be done with love.” γινέσθω is a third person singular imperative, and perhaps the NIV/CSB see ὑμῶν reflected in the implied person of the imperative (although the verb is singular and the pronoun is plural), but I still think that misses the mark. πάντα ὑμῶν carries the idea of all the things that all of you do (both words are plural). Let all that you do — and I mean all of you — let all that you do be done in love (γινέσθω is singular referring to a neuter plural subject). The emphasis is on the fact that every person, and every action, should be done in love. I think omitting reference to ὑμῶν misses that emphasis. “Let everything that all of you do be done in love.” It’s emphatically all-inclusive.

In this day and age in which arguments over loss of personal freedoms, and the intrusion of secular authorities into religious life, are splitting the church — and it is — we need to hear Paul’s admonition afresh. Whatever position you hold about anything and everything, if you are not acting in love, if you are not speaking, in love, you are nothing more than “a resounding gong or a clanging cymbal” (1 Cor 13:1).

The Greatest Commandment is not to be right! It is to love God and to love your brother and sister. Something to think about. 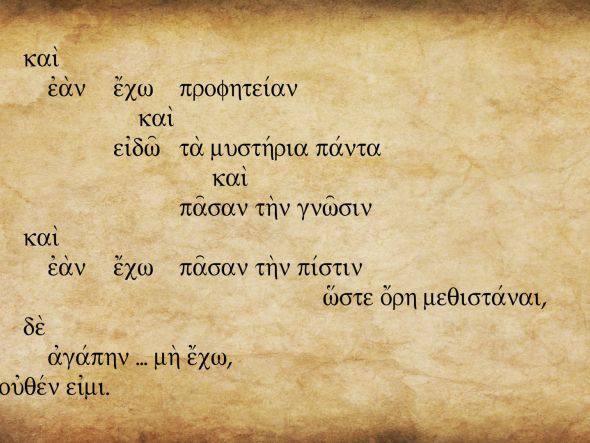 Where O Where Did the Comma Go? (1 Cor 13:2) - Mondays with Mounce Sometimes the absence of a comma can significantly alter the meaning of a passage, and its inclusion can clarify. 1 Cori...
Related Posts
Is 1 Corinthians 13 Poetry? (Monday with Mounce 37) We had an interesting experience on the ESV translation committee when we were doing 1 Cor 13. We were working really hard on the passage, perhaps especially hard since it was such a famous ...
Bill Mounce June 1, 2009
To Burn or To Boast? (1 Cor 13:3) — Mondays with Mounce 257 A little textual criticism. Paul writes, “If I give away everything I own, and if I surrender (παραδῶ) my body in order to boast (καυχήσωμαι), but do not have love, it benefits me nothing.” ...
Bill Mounce April 6, 2015
Your form could not be submitted. Please check errors and resubmit.