Filling in the Blanks (Romans 6:5) - Mondays with Mounce

When we construct a parallel sentence in English, we can leave out words in the second half, assuming them from the first half. We do it so naturally in English that we may not notice what we are doing. Greek does the same, but sometimes it can be difficult for an English speaker to see what is going on.

In Romans 6, Paul has been talking about the role of ongoing sin in the believer’s life. In verse 5 he says, “For if we have become united with him in the likeness of his death, we will certainly also be united with him in the likeness of his resurrection.” If you check the Greek, you will see that there are no specific words behind the italicized words above. σύμφυτοι and τῷ ὁμοιώματι are being assumed from the first half of the sentence. In the graphic above, I reversed the order of the second verb ἐσόμεθα and τῆς ἀναστάσεως so you can see the parallel between the γεγόναμεν and ἐσόμεθα.

In the same vein, the Greek behind “united with him” only says “united with.” σύμφυτοι is a compound with σύν (ν becomes μ because of the following labial φ) meaning “united with.” “United with” whom”? “Him” is assumed from context, with “Christ.” This is a common problem with compounds made with σύν, and translations almost always allow context to fill in the blanks. But “blanks” they are. At least the NASB italicizes “him.”

Not to beat a drum, but this once again shows that all translations are not strictly “literal” nor are they always transparent to the Greek. I’m not sure what the benefit is of saying a translation is even “essentially literal” when the non-Greek reader can’t tell when they are word for word and when they add in explanatory words.

But this is one reason why you are learning Greek, to see what the truly literal Bible says, the Greek Bible.

Photo by Jon Tyson on Unsplash. 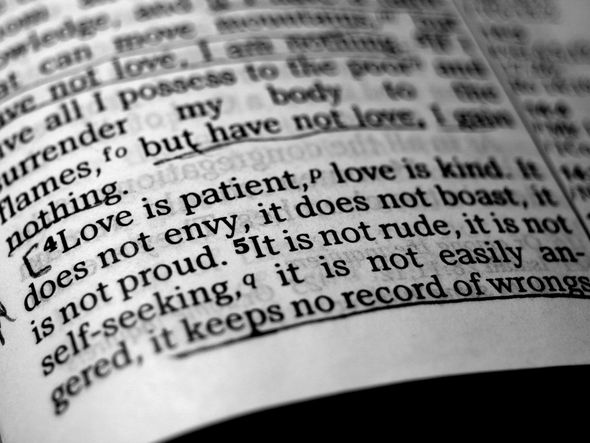 1 Corinthians 13: Why Is Love So Important? Today’s post is adapted from 1 Corinthiansin the Zondervan Exegetical Commentary on the New Testament, as well as Paul D...
Related Posts

Is Jesus God? (Rom 9:5) - Mondays with Mounce Prof. Bart Ehrman claims that originally John 1:18 declared Jesus to be the “unique Son” (μονογενὴς υἱός), which was later changed to “unique God” (μονογενὴς θεός) by the orthodox scribes wh...
Bill Mounce February 8, 2021
Your form could not be submitted. Please check errors and resubmit.