How Are We to Live Out the Bible Today? An Excerpt from The Blue Parakeet, 2nd edition by Scot McKnight

Throughout this process of conversion and reading the Bible, I made discoveries that created a question that disturbed me and still does. Many of my fine Christian friends, pastors, and teachers routinely made the claim that they were Bible-believing Christians, and they were committed to the whole Bible and that — and this was one of the favorite lines — “God said it, I believe it, that settles it for me!” They were saying two things and I add my response (which expresses my disturbance):

In today's excerpt from the second edition of The Blue Parakeet: Rethinking How You Read the Bible, Scot McKnight tells the story of how as a student he began to see that Christians read the Bible differently and it was not so easy to "apply" the Bible as he had originally thought. 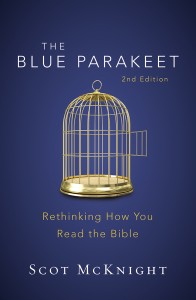 Why say “hogwash,” a tasty, salty word I learned from my father? Because I was reading the same Bible they were reading, and I observed that, in fact — emphasize that word “fact” — whatever they were claiming was not in “fact” what they were doing. (Nor was I.) What I discovered is that we all pick and choose. I must confess this discovery did not discourage me as much as it disturbed me, and then it made me intensely curious (and it is why I wrote this book). The discoveries and disturbances converged onto one big question:

How, then, are we to live out the Bible today?

This question never has been and never will be adequately answered with: The Bible says it, and that settles it for me. Why? Because no one does everything the Bible says. Perhaps you expected this question: How, then, are we to apply the Bible today? That’s a good question, but I think the word “apply” is a bit clinical and not as dynamic as the phrase “live out.” But we will get to that later.

Here’s an example of my discovery process as a young student of the Bible. When you and I read the letter of James, brother of Jesus, we hear these words: James 1:26 – 27

James knew what he was talking about, and, truth be told, there’s nothing hard about understanding what James said. It’s about as plain as the directions on a stop sign. The clarity of these words is the problem. For all kinds of reasons, and we’ll get to those soon, what James said had almost nothing to do with the Christian groups I knew:

Nope, for James, a pure Christian, the kind God approves of, was one who showed compassion to orphans and widows and avoided being polluted by sin at all costs. Frankly, we emphasized the not being polluted by sin, but we defined “polluted” in ways that had nothing to do with compassion for the marginalized and suffering. For instance, we were dead set against movies, drinking wine, and sex before marriage. In our version of reality, these three were all related — if you drank with your girlfriend, you’d lose your senses and go to a movie and end up having sex. I’m not only making fun of my past, I’m emphasizing how distorted things got — a good, solid Christian was one who didn’t do specific things that were against the rules. It also had to do with what we did — which was go to church weekly, read the Bible daily, and witness as often as we could. These aren’t bad things; in fact, I learned to love the Bible because of this context. But the one thing we didn’t do was follow everything James said!

As I kept looking around me, this began to disturb me. How in the world were we reading the same Bible? One thing was clear, we were all reading the Bible the same way, and that meant we had somehow learned not to follow the plain words of James…

The Question Is “How?”

What made me so curious and what gave me a deep discontent was how we came to our answers. Some people went straight to the Bible and stayed there; some people took one passage and overwhelmed another; yet others read the Bible, appealing to history and change and then to theologians, science, pastors, psychologists, and even to “that’s the way we do things at my church.” I began to see that Christians read the Bible differently and I began to see that no one group seemed to get it all right. At that time in my life I was asking questions like these:

Why is it that one group thinks the charismatic gifts are dead and gone while other groups vibrate with tongue-speaking and words of prophecy?

Why do some churches ordain women and let them preach while other churches have folks who get up and walk out when a woman opens her Bible for some teaching in front of men?

As a faithful attendee of churches, as one fully committed to the faith, as one who read his Bible daily, and as one who watched and listened to debates unroll and even unravel, I became convinced that it was not so easy to “apply” the Bible as I thought it was. In fact, when it came to contentious issues, how we read the Bible discerns how we are to live. To be perfectly honest to this young student of the Bible, I knew there was plenty of picking and choosing on both sides of every question. I pressed on for two more decades and I have now come to the conclusion that this question — How, then, are we to live out the Bible today? — is a pressing question for our day.

Next week, come back to read about how communities of believers can discern how to address the messy, gray issues confronting their churches today. 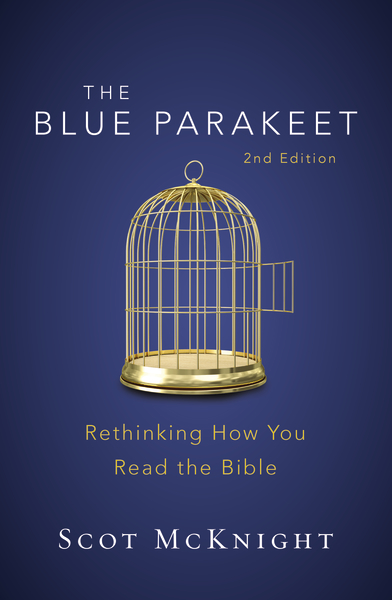 To continue to gain a fresh perspective on how to approach the Bible, purchase your copy today on Amazon, Barnes & Noble, or Christian Book.