Is the Bible “Patriarchal”? Yes and No - An Excerpt from Gender Roles and the People of God 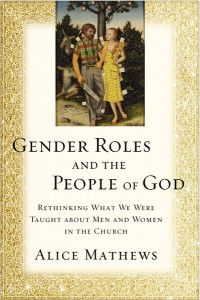 Patriarchy—literally, “the rule of the father,” from the Greek patriarkhēs—is any systemic structure in which men or the eldest male hold the power, particularly over women, typically within a household but also in broader society. It has been with us almost since the dawn of humanity.

But is it biblical?

Alice Mathews asks this question and more of this important topic in her new book Gender Roles and the People of God:

How are we to think about the role or place of a woman in a patriarchal system? What is this woman, created as the man’s helper, according to Genesis 2:18? Is she…merely “a loyal and suitable assistant” to a man? Is this what God intended us to learn from that text? Or is there more to the story? If so, what is that story? (36)

Before spotlighting the stand-out women of the Bible in their patriarchal world and assessing the theology behind gender-based hierarchy, Mathews pauses to address two competing views on the birth of patriarchy that place the social structure either in creation or the fall.

View 1: Hierarchy Is Baked into Creation

The Danvers Statement summarizes this first view: “Adam’s headship in marriage was established by God before the Fall, and was not a result of sin.”

Proponents of gender-based hierarchy don’t believe ontological equality of men and women leads to functional equality; equality of being does not mean an equality of roles. Using Genesis 2:18, they argue four points:

Mathews explains the first argument is the most widely used of the four, quoting George W. Knight:

“It is simply the proper application of concepts and realities to affirm that if one human being is created to be the helper for another human being, the one who receives such help has a certain authority over the one who is his helper.” (38)

Supporting argument two, James Hurley suggests primogeniture from Old Testament law proves Adam’s prior creation gave him superiority. Similarly, Samuele Bacchiocchi argues that since origin and authority are interrelated in the Bible, Adam is the "source" of Eve, requiring appropriate respect and submission.

In short, view one argues that God baked gender-based hierarchy into creation.

Mathews carefully addresses each of these four arguments. In summary:

Drawing our attention back to Genesis 1, she offers an alternative view. Here we see “the whole created universe (from stars in space to fish in the sea) is carefully organized into a hierarchy of order” (36). Genesis 1:26–28 reveals no hint of male-female hierarchy, however:

Everything in this text points to equal sharing in family building and in exercising dominion. God did not say to Adam, “You are to exercise dominion,” and to Eve, “You are to build the family.” Both the man and the woman were given both commands, pointing to shared parenting and shared dominion. In a world already carefully organized into a hierarchy of order, God placed a man and a woman without hierarchy. (37)

If gender-based hierarchy isn’t part of creation, and mutual dominion was God's intent, what happened?

The Fall. Hierarchy “was imposed when [Adam and Eve] chose to disregard [God's] command and eat the forbidden fruit” (46), because sin requires some form of hierarchy. “As a result of their sin, the man was now the master over the woman, and the ground was now master over the man, contrary to God’s original intention in creation” (47).

In short, view two argues that gender-based hierarchy is a distortion of creation; it was never God’s intent.

“In this book,” writes John Jefferson Davis of Gordon-Conwell, “Dr. Alice Mathews harvests a lifetime of serious scholarship and practical ministry experience in the church and academy to make a cogent case—biblical, historical, theological, and practical—for the liberation and employment of the spiritual gifts of all God’s gifted and called people, both women and men.”

Professors, do you think Gender Roles and the People of God might be the right book for your class? Request an exam copy here.

Or, buy your copy today at Amazon, Barnes & Noble, or Christian Book.

Jeremy Bouma
Jeremy Bouma (Th.M.) has pastored on Capitol Hill and with the Evangelical Covenant Church in Michigan. He founded THEOKLESIA, which connects the 21st century Church to the vintage Christian faith; holds a Master of Theology in historical theology; and makes the vintage faith relevant at jeremybouma.com.
Next Post
What’s the Point? (James 1:18) - Mondays with Mounce 293
What’s the Point? (James 1:18) - Mondays with Mounce 293 One of the things I am sensitive to is the difference between an indicative and a non-indicative form. English style oft...
Your form could not be submitted. Please check errors and resubmit.