7 Places We Find Jesus in the Old Testament

From beginning to end, the Bible reveals the glory of Jesus. But for many Bible readers, it isn’t that simple.

While we know Jesus is the fulfillment of the Jewish story and we want to better understand how the two Testaments relate, we’re often unsure how the Bible’s many stories, characters, and events relate to each other—especially to Jesus. Some are tempted to force the Bible's many pieces together, making superficial jumps from the Hebrew Scriptures to Jesus' story. But most are left wondering:

Christ from Beginning to End answers these questions, helping Christians better understand how to read the Bible as a story, seeing how every part of Scripture fits together to reveal the glory of Christ Jesus—from Genesis to Malachi, Matthew to Revelation.

“Like a puzzle,” authors Trent Hunter and Stephen Wellum write, “the pieces of the Bible…do fit together.” And they hope “you will get a clear understanding of the Bible’s unity and central message” (28, 29)—which includes the ways Jesus is found in the Old Testament. Here are seven ways.

1) Jesus is the Last Adam

From the beginning, the full story of Scripture reveals the full glory of Christ—even with Adam. Hunter and Wellum remind us that Adam was “not just the first man in God’s story. He is the representative of humanity and the head of creation itself” (80). And God gave him responsibilities and roles later expressed in Israel:

While he did not possess any explicit title or office, Adam functioned as a prophet, priest, and king. As the Bible’s story progresses, these titles identify other people who carry on these original tasks—which all anticipated a greater office holder: Jesus Christ. Hunter and Wellum explain:

[T]hese roles express the deeper role God originally intended for humans. That role was first established in Adam, but then only Jesus as the last Adam and God the Son perfectly fulfills it. Then he restores it in us (Heb. 2:5–18). (81)

2) Jesus is testified to by ‘the Law and the Prophets’

Paul is clear about Christ’s whereabouts in the Old Testament: “But now apart from the law the righteousness of God has been made known, to which the Law and the Prophets testify” (Romans 3:21).

“‘The Law and the Prophets’ is shorthand for the Old Testament,” Hunter and Wellum explain, “which Paul says prophesy or testify of the salvation that later comes in Christ” (100). In other words, Jesus is present throughout the Torah and the Major and Minor prophet books in the Old Testament. In these pages we find both hope and help:

God is providing for our instruction, endurance, encouragement, and, ultimately, our hope. As we see how God unfolds his glorious plan of redemption in Christ and how he keeps all of his promises, we learn to trust, love, and obey him. The Bible is long and layered for a reason. It prepares us to see and receive Jesus as the only solution to our problem and the only Savior from our sin. (100)

Throughout their book, Hunter and Wellum carefully explain how God’s promises in Genesis 3:15 find their fulfillment in Messiah Jesus and how the Old Testament’s characters, events, and story all point to Jesus.

3) Noah: a Foretaste of judgment and salvation through Christ

If Jesus is the last Adam, Noah was meant as a new Adam. In his story, two themes emerge, judgment and salvation—which offer a foretaste of Jesus in the Old Testament.

“As we ponder Noah’s flood, we are confronted with the harsh reality of what humanity deserves for its sin and rejection of God. More accurately, the flood is a foretaste of coming judgment, of what humanity will receive” (108–109).

Hunter and Wellum explain in their book how Jesus compares his return and the future judgment to Noah's flood in the Old Testament. Jesus said, “As it was in the days of Noah, so it will be at the coming of the Son of Man” (Matthew 24:37). Yet the final judgment will be far worse: “In the final judgment there is no relief, and in this way Noah’s flood becomes a reminder to us of a greater judgment to come, which we ought to take seriously” (109).

But positively, Noah’s salvation is a foretaste of coming salvation in Christ. Isaiah 54:9–10 speaks to this. As does 1 Peter 3:20–22, which explains how our baptism corresponds to Noah passing through the waters to find salvation. Hunter and Wellum explain:

4) Isaac: Jesus is the “seed” of Abraham and true substitute

Yes, it is through Isaac, the promised seed, that God’s salvation will come to the world. But God is also revealing that Isaac is not enough. Isaac, too, is a sinner in need of a savior. God’s promise will come through Isaac, but ultimately Isaac cannot save. The Savior must come outside of Isaac, by God’s own provision. This is the meaning of the ram that God provides. In sparing Isaac, a substitute must still take his place. (117–118)

Of course, that substitute ultimately comes through Christ. Hunter and Wellum explain:

God did provide a substitute for Isaac, hinting that God himself must ultimately provide the proper substitute to pardon human sin… Isaac needed a substitute to die in his place, and God provided. Abraham hears the voice from heaven say, “Stop! There is another to take his place.” Yet when the Father and Son walk to Calvary, there is no voice saying, “Stop. Here is another.” (123–124)

They go on: “As the Bible’s story unfolds, we learn that it is only through the true ‘seed’ of Abraham, Christ Jesus, that believers from all nations become children of Abraham (Galatians 3:9)” (125).

5) Jesus is greater than the Law-covenant

“Christ and his covenant are so much better!” Hunter and Wellum declare. "This is exactly what the Law-covenant was given to help us see.” What’s more: baked into the Law-covenant were “carefully designed limitations" that pointed toward something greater. As Hebrews 9:8 explains, “The Holy Spirit was showing by this that the way into the Most Holy Place had not yet been disclosed as long as the first tabernacle was still functioning.”

Christ from Beginning to End outlines several divine patterns that reveal past limitations and beautifully point us to Christ in God’s dealings with Israel through Moses and the Law-covenant. Here are a few of them:

7) A vivid portrait of our suffering servant

The prophet Jonah reminds us, “Salvation is of the Lord” (Jonah 2:9). And all along the way in God’s story, “the story of salvation advances a step further as the Lord takes the initiative to save. The prophets continue this message, carrying it forward” (180).

How do they reveal this salvation will be accomplished? “The Lord’s salvation is made possible through a sinless sufferer” (183), a concept Hunter and Wellum explain is tied to the traditional concept of substitute—“one cast in terms of the previous patterns, but who now, in himself, solves the problem of sin fully and forever” (183). The prophet Isaiah particularly speaks of this coming servant, “one who is from Israel but who is also distinct from Israel. A servant who represents Israel because he is Israel’s king and a truly obedient son” (185).

We have a problem: sinful humans need to be reconciled to a holy God. Isaiah reveals how this will be made possible: “the Lord will accomplish a substitutionary sacrifice for sin. He will do it through the suffering of his obedient servant… The servant who is our Savior is God’s answer to the tension we have highlighted time and again” (184, 186).

Hunter and Wellum explain that the Messiah-Servant, Jesus Christ will do two things in his substitutionary death: “First, he will take what is ours—our iniquities. And second, he will give us what is his—his righteousness. He will provide an obedient covenant partner” (186).

In the prophet Isaiah, we find a vivid portrait of the future death of Messiah Jesus, our Suffering Servant.

Christ from Beginning to End explains how the full story of Scripture reveals the full glory of Christ. This post barely scratches the surface of the book, which in 270 pages examines where Jesus is found in the Old and New Testaments. This book will help you detect the grand story within the entire Bible.

Graeme Goldsworthy says, “This book is a gem for its treatment of the way the Old Testament contributes to our grasp of what it means for Jesus to be the Christ.” “This is the best class you never got to take,” adds Justin Taylor. Read it yourself and better understand how full story of Scripture reveals the full glory of Christ.

What Is the New Covenant?

What Does the Old Testament Say about the Trinity? 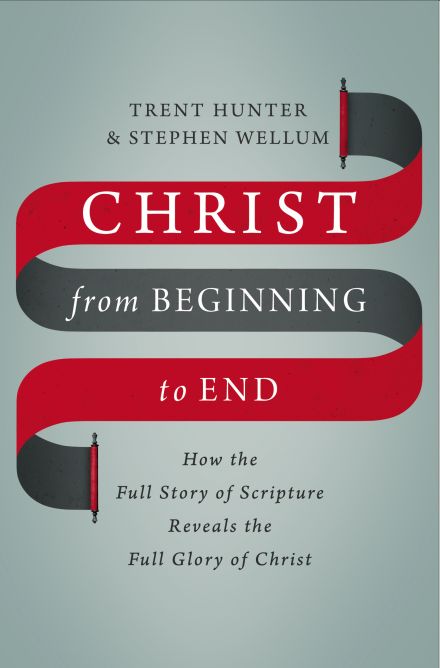 Christ from Beginning to End Trent Hunter
“This book is simple, but not simplistic, and it is accessible to those who are reading the Bible for the first time and helpful for those who have read the Bib...
Hardcover, Jacketed
Not Available Request an Exam Copy
Next Post
Understanding the Creation Story from Genesis 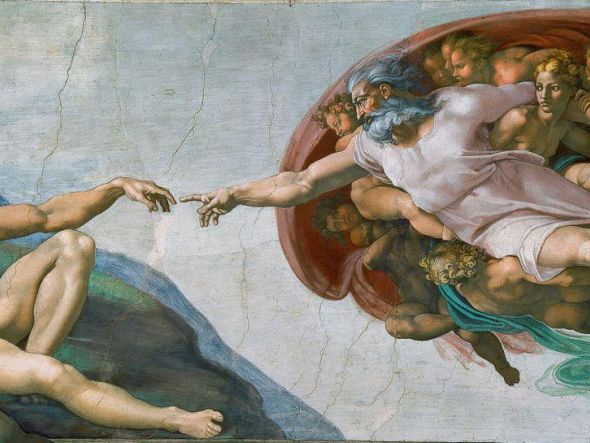 Understanding the Creation Story from Genesis How did the world begin? Was the world a cosmological mistake or an intentional creation? What existed before the univer...
Your form could not be submitted. Please check errors and resubmit.