Reading Proverbs In the Context of the Old and New Testament 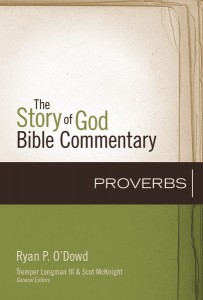 One of my seminary professors used to cheekily refer to common Christian devotional practices as our “daily bread crumb.” Meaning: we often take a verse or even part of a verse and spin out a comforting crumb of exhortation at the expense of the whole loaf of biblical bread—whether the surrounding pericope or greater.

Perhaps with no other place in Scripture do we do this than with Proverbs. Ryan O’Dowd offers an important reminder in his new commentary on Proverbs (Story of God Bible Commentary) when studying this book:

such casual study of individual proverbs can be shortsighted, both because it is apt to overlook the endless depth of each saying and also because the sayings take on a whole new life in the larger collection of thirty-one chapters….To get wisdom one must wrangle seriously with all of these proverbial sayings as a collection. (17)

Further still, to fully appreciate this collection of wisdom, we need to set it into its proper context by understanding the entire breadbasket, as it were, of wisdom in the Old and New Testament. Below we’ve briefly engaged the five contexts O’Dowd outlines in his sturdy introduction to fully appreciate the wisdom Scripture offers us.

First, the Old Testament expresses a role of wisdom in God’s creation of the world. “‘Wisdom’ here is not merely an inert adjective. Rather it speaks to the pattern by which God creates three realms in days 1–3 and then fills them with their appropriate form of life in days 4–6” (39). Psalm 104:24 expresses this relationship:

“How many are your works, O Yahweh! In wisdom you made them all; the earth is full of your creatures” (Author translation)

The wisdom-creation dynamic isn’t limited to the original creation, but also informs earthly project, like building the tabernacle. “The craftspeople are specifically skilled with ‘wisdom’” (40) in order that the glory of Yahweh might fill it.

During the nineteenth and twentieth centuries scholars struggled to relate wisdom literature to Israel’s covenants and redemptive history. Franz Delitzsch was an exception. He argued Proverbs and Deuteronomy echo one another, and many recent scholars have followed suit, O’Doud included:

I argue throughout this commentary that wisdom provides insight into the created and moral order of God’s world, so it makes perfect sense for it to give way to just laws. If Israel had actually obeyed the law, it would have been clear to the nations that this way of ordering society surpassed their own stories and law codes. Indeed, Deuteronomy has a uniquely humanitarian character to it. (41)

Then there is the relationship between Proverbs and the similar wisdom works of Job and Ecclesiastes. “The crises in these latter books do not react to the worldview in Proverbs so much as narrow and enhance the more idealistic message of Proverbs.…Job and Ecclesiastes react more strongly to the challenges of life in a fallen world” (40).

So Proverbs strong correlative view of character and consequences is sharpened in Job, drawing us to argue with God in prayer. Where Ecclesiastes is often styled as a reaction to Proverbs’s optimism, in the end it still brings its despair around to Proverbs same foundation of wisdom.

O'Dowd concludes, “whereas Proverbs looks back at the goodness of creation with a hope that is never fully articulated or justified, Job and Ecclesiastes look forward with desperate hope for relief from the heavenly realms” (43).

Wisdom within the prophetic literature carries an interesting dynamic, for they are both critical and expectant of it.

On the one hand, “many of the prophets are critical of a class known as ‘the wise’” (43), and criticize Israel for breaking their covenant with Yahweh. On the other, “The prophets also look forward to the coming of a wise messiah,” the One who would “bring together the wisdom, hope, and justice of the law and the wisdom literature” (43-44).

Wisdom and the New Testament

“Wisdom is God’s gift to us, not merely to get by in life, but to bring about the flourishing of the whole creation….It could be argued that wisdom has the broadest applicability of the genres in the Bible. It is concerned with everything.”

Engage O’Doud’s commentary yourself to navigate this important biblical book, so that you can live and teach others to live flourishing lives.