What History Tells Us About Jesus 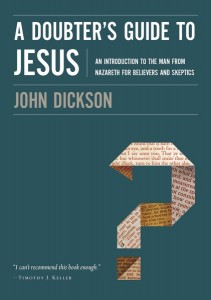 Christianity is unique among the world religions because it claims to be historical. It revolves around a series of events that are believed to have occurred in modern Israel between 5 BC and AD 30.

Which makes it open to historical scrutiny.

As John Dickson explains in his new book A Doubter’s Guide to Jesus: “If you claim that something spectacular took place in history, intelligent people are going to ask you historical questions.”

How has it fared in the face of such critical observation? Surprisingly well! Particularly because Jesus is mentioned several times outside of the New Testament.

One lucky outcome of this flurry of ancient literary output [about the Roman Empire] is that a small-town Jewish teacher, named Yeshua ben Yosef, or Jesus son of Joseph, happened to rate a mention in several of the writings of the period. This is not as predictable as you might imagine… It is a sheer and happy accident of history that Jesus rated a mention outside the texts of the New Testament. (22)

And what does this history tell us about Jesus?

First there are the sources from Greco-Roman history that mention Jesus in passing on numerous occasions in the decades following his death.

Dickson reveals that around AD 55 the pagan historian Thallos mentions “a darkness coinciding with the crucifixion of Jesus,” describing it as an eclipse of the sun (23). While not historical proof of the resurrection of Jesus, it does reflect the New Testament account.

Then the stoic writer Mara bar Serapion “refers to Jesus as a king, teacher, and martyr, and he compares him to the Greek greats Pythagoras and Socrates” (23). And the Roman administrator Pliny the Younger mentioned early Christian worship of Jesus “as a god” (23). Again, these descriptions of Jesus as king, teacher, martyr, and God written by these Roman writers reflect the Bible’s account, too.

Cornelius Tacitus scathingly refers to Jesus’ execution under Pontius Pilate and describes the movement surrounding him as a "deadly superstition." (23)

He goes on to explain how the historical record “is particularly important given Tacitus’s reputation among contemporary historians as imperial Rome’s greatest chronicler” (23).

So among the Greek and Roman historians, Jesus was known as a great king, teacher, and martyr; was understood to be viewed as a god by his followers; and crucified under suspicious circumstances and during mysterious natural phenomena.

Second, Dickson shows how Jesus is mentioned on several occasions in Jewish writings during the decades after Jesus’ crucifixion, adding more to the historical record.

Elsewhere, Josephus “recounts the martyrdom of a man called James, whom Josephus describes as the ‘brother of Jesus the so-called Messiah’” (25). Of course, this same brother appears frequently in the New Testament, and describing Jesus as the "so-called Messiah" would have been an important notation for a Jewish historian.

Another valuable Jewish source is the Talmud, an ancient commentary on Jewish law. One passage justified “Jesus’ execution at the time of the Jewish Passover on the grounds that he ‘led Israel astray’ and ‘practiced sorcery’” (25). It also insists in a later passage that Jesus’ mother Mary was an adulteress, a reference to the mysterious circumstances surrounding her pregnancy and his virgin birth.

Again, non-Christian historical sources shedding more light on the person at the center of Christianity.

8 Things History Tells Us About Jesus

“These Greco-Roman and Jewish references provide little more than an outline of Jesus’ life,” Dickson explains. “They are too brief and cursory to be of value in reconstructing a ‘life of Jesus.’” And yet, “it is worth listing the handful of details about Jesus we can glean from non-Christian sources, without even opening a Christian text.”

And what do these historical sources tell us about Jesus? At least eight things:

“Obviously, nothing can be gained from the above about what Jesus stood for, what he expected from his followers, or what drove him to the path of martyrdom” (27). Dickson is right, for these details we need the writings of the New Testament.

Do you want to know what the Christian sources say about Jesus, and how they add to (and confirm) what history tells us about him? Explore the rest of A Doubter’s Guide to Jesus to discover the direct and background sources of Jesus’ life and the New Testament.