Have We Misunderstood Romans 1 on Gay Sex? An Evaluation of 6 Views

Preston Sprinkle believes we need a new discussion around a hot-button topic in the church: same-sex relationships and marriage.

Eschewing recycled responses and easy answers, his new book People to Be Loved: Why Homosexuality Is Not Just an Issue freshly engages the passages and people behind the issue in a way that respects both, while challenging Christians across the spectrum.

“Are we sure we’ve understood what the Bible really says about same-sex relations?” (15) Sprinkle asks. Especially the crucial Romans 1 passage? Have we misunderstood it?

1) Was Romans 1 about heterosexuals having homosexual sex?

Though this view has been largely abandoned, some have believed that Romans 1:26-27 specifically addresses people born with a heterosexual orientation acting contrary to their nature: in other words, straight people having sexual relationships with people of their same gender.

This view suffers by interpreting para physin to mean “against one’s personal (sexual) nature” (188). Sprinkle explains this definition “isn’t how the phrase is used by other [Greco-Roman] writers, and it almost certainly does not mean that here in Romans 1” (188).

2) Is gay sex only impure, not sinful?

Sprinkle argues, however, that Paul uses “impurity” elsewhere in his letters “as a synonym for sinful behavior, not just behavior that violates certain Jewish purity laws” (188).

Summary: Is gay sex only impure, not sinful? Sprinkle says “it's unlikely that Paul intends to distinguish between 'impurity' and 'sin'” (188).

3) Is Paul condemning just one form of gay sex, or all forms?

Consider Robin Scroggs' assertion that Paul only knew of one form of homosexual practice (pederasty), and this must be what he was critiquing in Romans 1 (189); if that is true, this argument goes, Paul's critique of homosexual sex acts is irrelevant for our modern question of monogamous, consensual, same-sex marriage (189-190).

Sprinkle points out three things in response: Paul doesn’t use the Greek words widely used to describe pederasty in Romans 1, Paul blames both partners for the immorality, and pederasty didn’t exist among women (189).

Another view argues that Paul only agrees with his Jewish interlocutor in Romans 1:18–32 so he can turn around and rebuke him in Romans 2 (190). Sprinkle argues that while this view accurately identifies a rhetorical twist in Paul's letter, it creates “a false dichotomy. Paul’s rhetorical twist does not mean that he is saying things he does not actually believe in Romans 1” (190).

Summary: We should not write off Paul's critique of gay sex in Romans 1 simply because he makes a rhetorical twist in Romans 2 (190).

5) Does Paul's condemnation of all same-sex relations stand today?

A recent view assets that Paul condemned all forms of same-sex relations, so we need to leave Paul's assessment by the wayside (191). This view rests on a number of assumptions about Paul’s view of women and our modern insights into same-sex relations.

“This approach assumes a view of Scripture I don't endorse,” writes Sprinkle (191), who adds: If we embrace this argument, what else of Paul’s letters should we jettison (191)? Also, we still haven't “arrived at a bulletproof understanding” of same-sex orientation, so it seems “a bit ambitous—if not arrogant” to critique Paul in light of our understanding(192).

Summary: We should not jettison Paul's writings on homosexuality simply because contemporary culture may take a different stance (see pages 191-92).

6) Was Paul only critiquing excessive lust?

This view holds that Paul isn’t critiquing all same-sex relations, only those resulting from excessive lust and uncontrollable passions (98). Those who hold this view argue that many Greco-Roman writers believed same-sex eroticism arose out of excessive lust, and Paul was one of them (98). They conclude that Romans 1 doesn’t apply to loving, consensual, non-lustful same-sex marriages—which is what some Christians argue for today.

Sprinkle rejects this view for 4 reasons:

Summary: Have some mistaken Paul's critique of same-sex relations for a critique of excessive lust in general? There are four strong reasons (listed above) to counter this suggestion.

Sprinkle spends an entire chapter and appendix exegetically outlining three significant observations that have bearing on the question "Have we misunderstood Romans 1:26-27." Here are 3 considerations:

Sprinkle concludes: interpretations that do not affirm gay sex and marriage “best represent what Paul is saying” (90).

However, Christians who hold a traditional view still struggle to reconcile the Bible’s prohibition of same-sex attraction with the message of radical, unconditional grace. Sprinkle's book meets that need.

“If I have rightly interpreted Paul,” Sprinkle writes, “then this would logically mean that it would be more destructive, not less, to encourage people to fulfill their desire for sexual intimacy with a person of the same sex” (102). So, what does that mean for a Christian response  those who self-identify as LGBTQI?

Explore this more in Sprinkle's book People to Be Loved: Why Homosexuality Is Not Just an Issue. The book is an important one, and this post just scratches the surface. Engage it yourself to better understand homosexuality and the people who can become obscured by that “issue.” 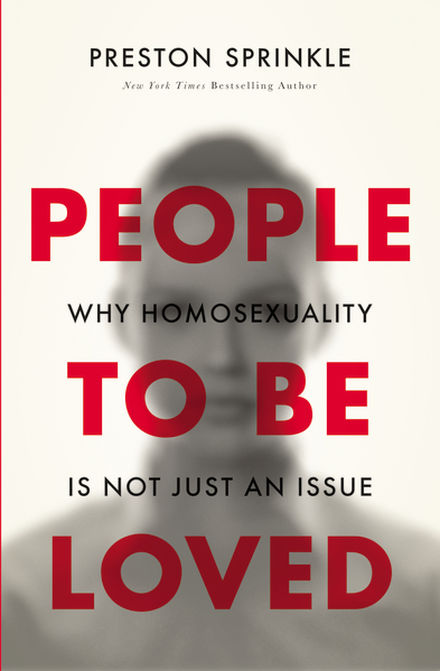